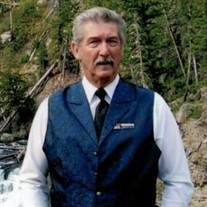 Leon Sturgeon, of Wann, passed away at 1:30 a.m. Saturday, May 28, 2016 at The Journey Home in Bartlesville. The family requests private family services. Cremation arrangements are under the direction of Walker-Brown Funeral Home. Leon Forest Sturgeon Sr. was born September 4, 1943 in Faye, OK to Leonard Richard and Edith Irene (Hale) Sturgeon. In March of 1944 the family moved to Wann. He graduated in 1961 from Wann High School. Leon served his country in the Army National Guard. On December 5, 1966 he married Charlene Fay Woodward in Parsons, KS and were married for over 49 years. Leon was a truck driver and worked over 20 years as a tour bus driver, transporting people all over the country. He enjoyed spending time on the farm. Leon loved vacations with his family and seeing the sights while driving his tour bus. He was deeply loved by those who knew him and will forever be remembered for his smile. Leon is survived by his wife, Charlene Sturgeon of the home. Three daughters; Barbara Cummins and husband Jim of McCune, KS, Shirley Watkins and husband Kelly of Overland Park, KS, Cindy Reyes and husband Frank of Ozark, MO and son, Leon Sturgeon Jr. and wife LaDonna of Dewey and adopted son, Brian Sturgeon and wife Lindsey of Wann. He was blessed with 13 grandchildren, 19 great-grandchildren and many friends. Leon was preceded in death by his parents, son, Frankie Sturgeon, brother, Richard Lavern Sturgeon and his beloved dog, Buddy. In lieu of flowers, donations can be made to: The Journey Home, 3406 SE Kentucky Street, Bartlesville, OK 74006 or Wounded Warrior Project, PO Box 758527, Topeka, KS 66675.

Leon Sturgeon, of Wann, passed away at 1:30 a.m. Saturday, May 28, 2016 at The Journey Home in Bartlesville. The family requests private family services. Cremation arrangements are under the direction of Walker-Brown Funeral Home. Leon Forest... View Obituary & Service Information

The family of Leon Forest Sturgeon Sr. created this Life Tributes page to make it easy to share your memories.

Send flowers to the Sturgeon family.