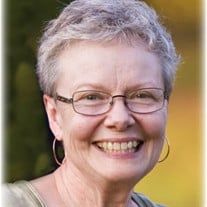 Linda Louise (George) Mingle, age 77, of Norman, Oklahoma, formerly of Bartlesville, passed away Tuesday, September 3, 2019 after an extended illness. She was born June 22, 1942, in Parsons, KS, to Victor L. and Charlotte (Connely) George of Altamont, Kansas. Her parents preceded her in death. She is survived by her husband, Bill J. Mingle, of Norman. A memorial service will be held at 11 a.m. Saturday, September 7 at Trinity Baptist Church, 801 North Peters, Norman, OK. Cremation has already taken place. Linda is also survived by her daughter Kerry L. Benson and her husband Brad of Frederick, OK, and their children, Kate, Rachel and Rebecca; her son Mark J. Mingle and his wife Melissa of Norman, OK, and their children, Brooke and Ryan. She is also survived by Bill's sister Nancy Robinson, her husband Gary of Independence, MO, and their daughters and families. Linda grew up and attended school in Altamont, Kansas, where her parents owned and operated The Altamont Journal newspaper. She graduated from Labette County Community High School in 1960. A talented musician, Linda was awarded scholarships at Wichita State University, where she graduated with a degree in Music Education in 1964. In the fall of 1964, she began a highly successful career as a music teacher. From 1964-1968 she taught in the Maize, Kansas schools, northwest of Wichita. In 1968, she was named the Outstanding Young Teacher in Sedgwick County Kansas. From 1969 to 1980, Linda held her most important job as a stay at home mom to her two children. She returned to teaching in 1980 in Bartlesville, OK, then became employed as a music teacher in the Dewey Public Schools in 1983 until her retirement in 2001. Many of her former students have often shared how she made a positive impact on their lives. Linda was married to Bill J. Mingle in Altamont on June 14, 1964. They made their first home in Wichita until Bill's work took them to Champaign, IL in 1969. In 1973, they moved to Bartlesville where they resided for 35 years. In 2008, they moved to Norman to be closer to their family. Linda became a Christian as a child while attending the United Methodist Church in Altamont. She was a faithful follower of Christ, spending much time in prayer and Bible study. She also directed children's and adult choirs in the churches to which she belonged. In later years, she quietly devoted much time to visiting elderly women in their residences. Her bright smile and engaging personality brought joy and cheer to all with whom she came in contact. Linda was a perfect example of a Godly woman as described in Proverbs 31. In lieu of flowers, the family invites friends and family to contribute in Linda's memory to the music program in a school district of their choice, or to the Bartlesville Community Foundation, 208 E. 4th St., Bartlesville, OK, 74003. The family is most grateful to the staff at Arbor House Reminisce in Norman and Physicians Choice Hospice, which provided Linda with loving care. Cremation arrangements were under the direction of Carter Davis, Davis Family Funeral Home, Dewey, Oklahoma.

The family of Linda Mingle created this Life Tributes page to make it easy to share your memories.

Send flowers to the Mingle family.