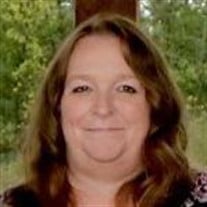 Lisa Marie Lea, 54, of Copan, died Friday in Bartlesville. While she finds her eternal rest with her Heavenly Father and her own father Gene, Lisa will be dearly missed by her mother, husband, children, grandchildren, and all who knew and loved her. Lisa was born the daughter of Robert Gene and Judy Marie (Carpenter) Gurley on January 3, 1965 in Bartlesville. She was raised in the area graduating from College High in 1983 - GO WILDCATS! At a young age, Lisa developed a love for roller skating and she often skated alongside her father as he managed the floor at the local skating rink. Lisa was active in choir and stage choir during her school years, she also sang in the church choir. Lisa worked various jobs throughout her life, but her passion and calling was to serve others. She was a private caregiver for many years before starting her 21-year career with H&G Pharmacy as a billing specialist and delivering various pieces of needed medical equipment to her clients 24/7. Lisa loved the many people she encountered and was able to help over the years. Richard and Lisa first met when they were very young at the Salvation Army. They knew each other growing up and reconnected in their late ‘20s. They decided to tie the love knot on May 23, 1998, and have been inseparable since. Lisa would oftentimes go out with Richard on fire calls and they enjoyed storm spotting together. They volunteered with the Red Cross Disaster Team and were activated many times over the years. Most of all she loved her children and grandchildren - she was an awesome grandma who took the grandbabies weekly to the Kiddie Park and the local Splash Pad. Lisa is survived by her husband of 27 years Richard of the home; mother Judy Gurley of Dewey; four children Robbie Hicks and Pam of Bartlesville, Julie Queen and Jordan of Dewey, Cody Lea of Bartlesville, and Ryan Lea of Minneapolis; and seven grandchildren, Kira Halcom, McKinzie Holmes, Natalye Holmes, Aria Queen, Dominick Queen, Kihanna Edwards and Ciraya Lea. She is preceded in death by her father. Visitation will be held on Tuesday, May 7, from 10-8 and Wednesday, May 8, 9-11, at the Davis Family Funeral Home – Dewey Chapel, 918-534-3030, 113 S. Osage (Hwy. 75), Dewey. Funeral services will be held 2 p.m. on Wednesday, May 8, at the Dewey First Church of God with Rev. Tom Cox Officiating. Interment will follow in the Dewey Cemetery. Services are under the direction of Carter Davis and the Davis Family Funeral Home – Dewey Chapel. Online condolences and remembrances may be shared at www.DavisFamilyFuneralHome.com.

Lisa Marie Lea, 54, of Copan, died Friday in Bartlesville. While she finds her eternal rest with her Heavenly Father and her own father Gene, Lisa will be dearly missed by her mother, husband, children, grandchildren, and all who knew and loved... View Obituary & Service Information

The family of Lisa Marie Lea created this Life Tributes page to make it easy to share your memories.

Lisa Marie Lea, 54, of Copan, died Friday in Bartlesville. While...

Send flowers to the Lea family.