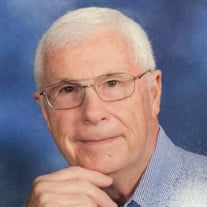 Lloyd W. Sowers, 84, passed away on Wednesday, June 22, 2022, in Bartlesville, OK. He was born December 9, 1937, in Cherokee, KS, to Lloyd H. and Thelma Sowers. He had two older sisters, Dona Rogers and Gloria Dauron. Lloyd grew up and attended school in Cherokee where he played basketball for Crawford County Community High School and graduated in 1956. In 1960 he received a B.S. in Business from Pittsburg State University. Lloyd joined the Army Reserves and served from 1960-1966 while working as an underwriter for the Western Fire Insurance Company in Ft. Scott, KS. During that time he met Kay Lindamood. They were married August 4, 1965. Lloyd and Kay moved to Bartlesville in 1966 when Lloyd took a job at Phillips Petroleum Company. He worked as an accountant for Phillips for 26 years. They joined the Bartlesville First United Methodist Church and raised their two children, Derek and Jilinda in Bartlesville. Lloyd could be easily amused and laughed often. He was funny, humble and always made sure his family knew how much he loved and was proud of them. He enjoyed coaching his son in Little League baseball, Boys Club and YMCA basketball and assisting in flag football. He coached his daughter in YMCA basketball and softball. He was proud of his two grandkids and made sure to teach them how to shoot a basketball with THE correct form. Lloyd and Kay enjoyed traveling throughout the years to different places around the country where Kay would attend real estate conventions. In their retirement years, they traveled with Truity Credit Union. Lloyd is survived by his wife, Kay; son, Derek of Bartlesville; daughter, Jilinda Robinson and her husband Michael; grandchildren, Lydia and John David Robinson of Waco, TX; niece, Nicky Davidson of McCune, KS; and three cousins. He is preceded in death by his parents and two sisters, Dona Rogers and Gloria Dauron. The family would like to thank the staff at Bartlesville Health and Rehab and Comforting Hands Hospice for their care of Lloyd during his final season of life. Visitation will be held on Thursday, June 30 from 10 a.m.-8 p.m. In lieu of flowers, memorials may be made to the Boys and Girls Club, 401 S Seminole Ave., Bartlesville, OK 74003. Services will be held at 10 a.m. on Friday, July 1 at the Davis Family Funeral Home & Crematory – Walker Brown Chapel, with The Rev. Dr. Greg Tener officiating. Interment will follow in the Memorial Park Cemetery. Services are under the direction of Carter Davis and the Davis Family Funeral Home & Crematory – Walker Brown Chapel. Online condolences and remembrances may be shared at www.DavisFamilyFuneralHome.com.

Lloyd W. Sowers, 84, passed away on Wednesday, June 22, 2022, in Bartlesville, OK. He was born December 9, 1937, in Cherokee, KS, to Lloyd H. and Thelma Sowers. He had two older sisters, Dona Rogers and Gloria Dauron. Lloyd grew up and attended... View Obituary & Service Information

The family of Lloyd W. Sowers created this Life Tributes page to make it easy to share your memories.