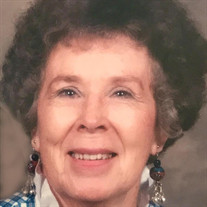 Mary Loretta Camron Chaney, wife, mother, grandmother, great-grandmother, community volunteer and organizer, died on November 9, 2021 at her home in Bartlesville at the age of 101. Loretta was born June 6, 1920 in Atoka, Oklahoma to Walter Lee Camron and Ora Lee Fitzpatrick Camron. She was the youngest of 7 children and was called “Babe” most of her life by her family. She led the life of a typical farm girl. Her first chores were bending the sunflower stalks for the seeds to fall to the ground where the chickens could eat them and also gathering the eggs. During the early years of the 1930’s her family travelled Route 66 to California for her father and older brothers to obtain employment. Her mother died in Arizona on one of these trips when Loretta was 14 years old. She was then sent to live with her older sister in Stillwater, OK. She graduated from Stillwater High School in 1938 and became a member of the Theta Rho Girls’ Club of Stillwater. While attending a party with this group she met Maurice Lee Chaney who was an engineering student at Oklahoma A&M (now OSU). They dated for several years and were married in 1942. It was World War II and Maurice joined the Navy and the two of them traveled to California to live when he was stationed at Port Hueneme in Oxnard, California. While in California, their daughter, Reta, was born. Four months after Maurice was deployed to Okinawa their son, Ron, was born. After Maurice’s discharge from the Navy, they moved to Caney, Kansas and then to Bartlesville where Maurice worked as an engineer for Phillips Petroleum Company. They also lived in London, England and Stavanger, Norway for several years when Maurice worked on the Ekofisk Project. They then returned to Bartlesville. Maurice died in 2011, at the age of 90. Loretta loved life. She loved to dance. She loved to square dance and ballroom dance and even taught line dancing until she reached the age of 99. She loved to play cards and organized several bridge groups. She loved to travel, and she loved parties-----especially those celebrating her birthdays or anniversaries! When Covid cancelled her 100th birthday dance, she made a determined effort to live another year to share her 101st birthday celebration with family and friends. She was a community volunteer and helped the Cub Scouts, the Girl Scouts (where she served as President of the Bluestem Council), the First Christian Church and the PTA. She touched many lives with her generosity and passion for life. The accomplishment Loretta truly enjoyed was that of co-founder of the 55+ Activity Center in Bartlesville. Just last week Channel 6 of Tulsa had a television special highlighting her life and her commitment to the formation of this Activity Center. She is survived by her daughter, Reta (husband Richard), son Ron, three grandchildren (Khristan, Rustin and Michael) and nine great-grandchildren (Parker, Payton, Brooke, Marinne, Camden, Bella, Palmer, Karelle and Aubryn). She is also survived by her close companion and dance partner, Joe Brooks. The family wishes to say a special word of thanks to Joe and to the nurses of Comforting Hands Hospice Group of Bartlesville, especially Lorie and Tiffany. These nurses and Joe helped her enjoy the last years of her life and were such a blessing in her life. In lieu of flowers, the family wishes to encourage donations to the 55+ Activity Center or the Girl Scouts of Eastern Oklahoma. Visitation will be held from 10-8 p.m. on Tuesday, November 16th and 9-1 p.m. Wednesday, November 17th at Davis Family Funeral Home & Crematory – Walker Brown Chapel at 4201 Nowata Road, Bartlesville, OK. A Celebration of Loretta’s Life Service will be held 3 p.m., Wednesday, November 17th, at Davis Family Funeral Home & Crematory – Walker Brown Chapel. Services are under the direction of Carter Davis and Davis Family Funeral Home – Walker Brown Chapel. Online condolences and remembrances may be made at www.DavisFamilyFuneralHome.com

The family of Loretta Chaney created this Life Tributes page to make it easy to share your memories.

Send flowers to the Chaney family.