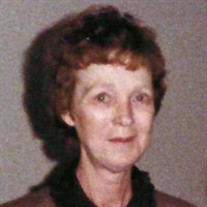 Lorraine (Peek) Thomas, 86, of Bartlesville, was surrounded by her loving children at The Journey Home in Bartlesville when she died Sunday, May 1, 2022. Lorraine was born the daughter of Lawrence Winfield and Dorothy (Petit) Peek on Dec. 11, 1935, in St. Joseph, MO. According to Lorraine, she was “Daddy’s Little Boy” (most definitely a daddy’s girl) as she enjoyed hunting and fishing with him. The family raised Springer Spaniels, and she loved dogs. Lorraine graduated from Lafyette High School in 1953. She went on to work at Mead Tablets where her father worked. Later she became a medical office manager and a property manager. One weekend Lorraine was with friends when they met a group of military men stationed at Topeka, KS. She quickly connected with Nelson “Al” Thomas and they were united in marriage in March of 1960. Al was a career Airman, and the all-in family was stationed in Germany and throughout the United States. Lorraine was a loving mother to four children: Anita, Paula, Michael and Jody. They settled in Texas and after Al preceded her in death in 1992, Lorraine moved back to St. Joe until moving to Bartlesville, OK, in 2017. Throughout her life, Lorraine loved to serve others and her community. A proud wife of an Airman, she was a member of the American Legion and the VFW as well as Eastern Star. Al and Lorraine enjoyed eating at their favorite restaurant Luby’s and dancing at the local VFW. She loved the thrill of the casinos and socializing with friends there. She also enjoyed playing bingo and calling bingo. She was proud of her grandkids and was always happy to see and spend time with them. She will be dearly missed. Lorraine is survived by her children: Anita Mudgett, Paula (Tom) Hall, Michael (Deena) Thomas, and Jody (Michael) Huwyler; 10 grandchildren, Thomas Mudgett, Andrew (Bridget) Mudgett, Chris Hall, Justin (Karis) Hall, Sidney Thomas, Tanner Thomas, Carri (Patrick) Lawless, Jessica (Joel) Barr, Sara Huwyler and Emma Huwyler; two great grandchildren Kennedy and Dahlia; and numerous other family and friends. She is preceded in death by her husband, parents, grandson Michael Thomas Foster and sister Dorothy Summers. Funeral services will be held at 1 p.m. on Thursday, May 5 at the Ashland Cemetery in St. Joseph, MO. Services are under the direction of Carter Davis and the Davis Family Funeral Home & Crematory – Walker Brown Chapel. Online condolences and remembrances may be shared at www.DavisFamilyFuneralHome.com. In lieu of flowers, the family asks memorials be given to The Journey Home at 900 Washington Blvd., Bartlesville, OK 74006.

Lorraine (Peek) Thomas, 86, of Bartlesville, was surrounded by her loving children at The Journey Home in Bartlesville when she died Sunday, May 1, 2022. Lorraine was born the daughter of Lawrence Winfield and Dorothy (Petit) Peek on Dec. 11,... View Obituary & Service Information

The family of Lorraine Winifred Thomas created this Life Tributes page to make it easy to share your memories.

Lorraine (Peek) Thomas, 86, of Bartlesville, was surrounded by...

Send flowers to the Thomas family.