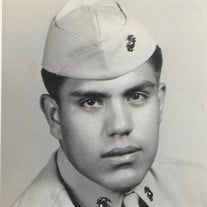 Louis J. Vargas, 85, died Monday in Bartlesville. He embodied “Semper Fi” (Always Faithful) and stayed loyal to his God, his family, his country, and his hometown. He was born in Dewey and except while he was away serving his country in the United States Marine Corps, he was a lifelong resident of Dewey and Washington County. Louis was born the son of Alfonso and Delores (Ruiz) Vargas on August 25, 1933. He was raised and educated in Dewey, attending Dewey High School with the Class of 1953. Louis developed a strong work ethic early in life - at age 11 he went to work at the Dewey Cement Plant as a driver. His main duty was to drive laborers to job sites in Coffeyville, KS. He said he could barely reach the pedals and did the best he could. Louis joined and was proud to serve his country from 1953 – 1955 in the U.S. Marines. He was a mechanic stationed at Marine Corps Air Station New River which is a Helicopter and Tilt-rotor Base in Jacksonville, NC. Once honorably discharged Louis returned home and worked for 10 years at Chevalley Moving, then one year as a cement contractor, 10 years at Benson Lumber in Dewey, and the next 20 years at the Washington County assessor’s office as a deputy assessor. Louis enjoyed retirement - he worked in his yard maintained his garden and loved to visit with people. He took on the role as full-time caregiver for his brother after a severe stroke and cared for him in his home for many years. He lived the core values of honor, courage and commitment. Louis was a lifelong member of Our Lady of Guadalupe Catholic Church in Dewey. He will be dearly missed by those that knew him. Louis is survived by one brother Esteban “Lou” Vargas of Dewey, sister in law Retha Vargas of Skiatook, and numerous nieces and nephews. He is preceded in death by his parents; two brothers Clemente and Alfonso; four sisters, Cecilia Meade, Frances Gomez, Mary Maldonado and Emilia Martinez. Visitation will be held on Thursday from 10-8 and Friday 9-1 at the Davis Family Funeral Home – Dewey Chapel. In lieu of flowers memorials may be made to Our Lady of Guadalupe Catholic Church, 400 W 9th St, Dewey, OK 74029. Graveside services will be held 2:30 p.m. on Friday, February 8, at the Dewey Cemetery. Services are under the direction of Carter Davis and the Davis Family Funeral Home – Dewey Chapel. Online condolences and remembrances may be shared at www.DavisFamilyFuneralHome.com.

Louis J. Vargas, 85, died Monday in Bartlesville. He embodied &#8220;Semper Fi&#8221; (Always Faithful) and stayed loyal to his God, his family, his country, and his hometown. He was born in Dewey and except while he was away serving his country... View Obituary & Service Information

The family of Louis Jose Vargas created this Life Tributes page to make it easy to share your memories.

Send flowers to the Vargas family.