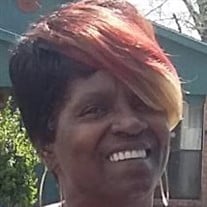 Lucreatia Trent was born December 18, 1957 in Bartlesville, Oklahoma. She received her education in Bartlesville where she attended Douglass, Central, Madison, and graduated from College High School. Creda was employed in many places in Bartlesville... View Obituary & Service Information

The family of Lucreatia (Trent) Jones created this Life Tributes page to make it easy to share your memories.

Send flowers to the Jones family.