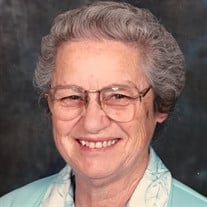 Lula May “Tootsie” Newport, age 87, a native of Bartlesville, OK, took her final trip and arrived at her new home in Heaven on Monday morning July 12, 2021. She departed this earthly pilgrimage from the home of her son and daughter-in-law, Don and Becky Newport, near Shepherd, MI. They had been her primary caregivers since April of 2021. She was blessed by other caregivers as well during the final years and months of her life. Her daughter and son-in-law Janette and Charles Schaper, her son Ron Newport and Susie Preston, and long-time family friend Susie Hampton were all instrumental in facilitating exceptional care during her journey with dementia. “Tootsie” was born on March 19, 1934 to Charles Frederick Henshall and Lula Janette (Mardis) Henshall. She married her high school sweetheart V. LeRoy Newport on August 12, 1950. To this union were born 4 children, 1 girl Janette and 3 boys, Dennis and twins Ron and Don. Tootsie had the most unique testimony and loved to tell how she found God after not being raised in a Christian home. When trying to determine sometime later what she wanted to do with her life, she prayed to God that all she ever wanted to do was be a “soul winner.” And that she did. Visiting the sick, shut-ins, and sin-sick, she won many souls to the Lord. She and LeRoy were both called into the ministry in 1955 and served the Lord faithfully together for over 65 years until the time of his passing on March 17, 2020. They were both ordained ministers with the Bible Holiness Church organization headquartered in Independence, KS. They pastored churches in Missouri, Kansas, Oklahoma, Arizona, California, and Oregon. They also served the Bible Holiness Church organization in various roles of leadership and finally as General Superintendent for 15 years from August 1997 until the time of their retirement in 2012. Tootsie was a woman of many talents. She was an artist and an interior decorator, she loved to sing and preach, and had a special love for children. Her education in childhood development and experience as a pre-school teacher helped organize a childcare center for the Independence Bible School in Independence, KS. She was preceded in death by her husband V. LeRoy Newport, her son Dennis LeRoy Newport, her father Charles Frederick Henshall, her mother Lula Janette (Mardis) Henshall, and 5 brothers and 3 sisters. She is survived by one brother Gene Henshall of Mesquite, TX; one daughter Mary Janette Schaper (Charles) of Welch, OK; twin sons, Ronald Martin Newport of Ochelata, OK, and Donald Daniel Newport (Becky) of rural Shepherd, MI. She is also survived by 11 grandchildren, 17 great grandchildren, and 7 great-great grandchildren. Tootsie’s family will receive friends on Thursday, July 15, from 6-8 p.m. at the Davis Family Funeral Home & Crematory – Walker Brown Chapel, 918-333-7665, 4201 Nowata Rd, Bartlesville. Visitation will also be held Thursday from 11-8. A Celebration of Life service will be held at the Ochelata Bible Holiness Church in Ochelata, OK, on Friday, July 16, 2021 at 1 p.m. with interment to follow at the Ochelata Cemetery. Services are under the direction of Carter Davis and the Davis Family Funeral Home & Crematory – Walker Brown Chapel. Online condolences and remembrances may be shared at www.DavisFamilyFuneralHome.com.

Lula May &#8220;Tootsie&#8221; Newport, age 87, a native of Bartlesville, OK, took her final trip and arrived at her new home in Heaven on Monday morning July 12, 2021. She departed this earthly pilgrimage from the home of her son and daughter-in-law,... View Obituary & Service Information

The family of Lula May Newport created this Life Tributes page to make it easy to share your memories.

Lula May “Tootsie” Newport, age 87, a native of Bartlesville,...

Send flowers to the Newport family.