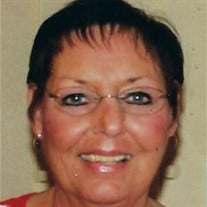 Lynda Katherine Gomez, 66, of Dewey, passed away Tuesday in Bartlesville. Lynda will always be remembered as a free spirit and missed by many friends and family who loved her. Lynda was born to James Robert Ford and Betty (Landis) Viles in El Dorado, IL in 1953. She grew up with three sisters, Cindy, Diana and Elaine. Later the family would move to Barnsdall, OK, where Lynda graduated, with the Class of 1971. Lynda’s sisters were a big part of her life and they shared a very special bond. Her sister, Elaine is the last remaining sister of the four. After graduating, she met and married Sam Scharnhorst. In 1973 they had a daughter, Samantha. Lynda and Sam did a lot of traveling around the United States. It was around this time that she met her lifelong friend Jeanna Wing in Tahlequah. Eventually Linda and Sam divorced, but Lynda and Jeanna remained friends their entire lives. Everyone knew how much Jeanna meant to Lynda. Lynda eventually moved to Dewey, OK where she met and married Robert Gomez. They enjoyed their time together and remained in Dewey, until Robert recently passed. All who knew Lynda, would agree she was free spirited, loved people and that she was an avid Elvis Presley, OU Sooners and Kansas City Chiefs enthusiast and had an enormous memorabilia collection. Lynda is survived by her mother Betty Viles of Dewey; daughter, Samantha Gomez and husband Julian of Bartlesville; sister, Elaine Holbrook and husband Bob of Weatherford; five grandchildren, Corey Gomez and wife Kristina of Dewey, Zachariah Gomez and girlfriend Cassadie Mindt of Bartlesville, Joey Gomez and fiancé Samantha Price of Stillwater, Miranda and Marissa Gomez of Bartlesville; two great-grandchildren, Grace and Kian Gomez of Dewey; as well as her best friends Jeanna and Gary Wing of Tahlequah, Amy Beal of Tahlequah and Glenda Gomez of Dewey; along with six nephews, many cousins, friends and loved ones. She was preceded in death by her father, her husband Robert, and two sisters, Diana Buoy and Cindy Ford. Visitation for Lynda will be held on Tuesday from 10 a.m. to 8 p.m. at Davis Family Funeral Home – Dewey Chapel, 918-534-3030, 113 S Osage (Hwy. 75), Dewey, OK 74029. Funeral services will be held 2 p.m. on Wednesday, at the Davis Family Funeral Home - Dewey Chapel. Services are under the direction of Carter Davis and the Davis Family

Lynda Katherine Gomez, 66, of Dewey, passed away Tuesday in Bartlesville. Lynda will always be remembered as a free spirit and missed by many friends and family who loved her. Lynda was born to James Robert Ford and Betty (Landis) Viles in... View Obituary & Service Information

The family of Lynda Katherine Gomez created this Life Tributes page to make it easy to share your memories.

Lynda Katherine Gomez, 66, of Dewey, passed away Tuesday in Bartlesville....

Send flowers to the Gomez family.