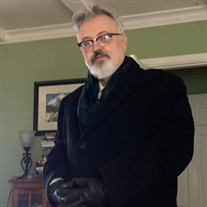 Ira Marc Carlson was born on July 19th, 1962, in Boulder, CO to Jan Meeker Carlson and Victoria Whitten (Phillips) Carlson. Marc spent his early years in Fort Collins, CO, before moving to Mankato, MN. He moved with his family to Stillwater, OK, where he graduated from Stillwater High School. Marc enlisted in the United States Army Reserves, and he graduated from Basic Training in the summer of 1981 at Fort McClellan. He attended Oklahoma State University, where he received a bachelor’s degree in history and anthropology. He also met the love of his life at OSU. He married Jennifer Delaine LaGrone on January 11th, 1986, in Tulsa, OK. After completing his undergraduate education, he attended the University of Tulsa and received a master’s degree in library and information science. Marc worked at McFarlin Library at the University of Tulsa for more than thirty-five years. He most recently served as the Director of Special Collections, and he loved his work dearly. He was an active member of the Honourable Cordwainer’s Company, and he served as their guild librarian for twenty years. Marc devoted years of his research career to the local and state history. He was committed to the preservation of Indigenous history, especially documentation of the history of songs and dances. He participated in conservation work in the Tallgrass Prairie, and he was extremely proud of that work. While Marc was quick to point out the good parts of history, he never shied away from the bad. He spent more than thirty-five years studying the Tulsa Race Massacre, and he was particularly interested in the preservation of the photographic evidence from that horrific event. His personal motto was “veritas officio mortuua,” which translates to “the truth is our duty to the dead.” Marc and his wife Jennifer participated in the Society for Creative Anachronism for decades, and his interests included research, historical combat, historical clothing, and shoes. He was especially known for his research about historical shoes. For several years, he was also an active member of the Tulsa School of Defense, where he studied Historical European Martial Arts. For decades, he ran a roleplaying game with a group of close friends. He had a razor-sharp wit, a bone-dry sense of humor, and a penchant for colorful understatement. After a long fight with alcoholism, he died on May 21st, 2022, in Tulsa, OK. Marc was preceded in death by his wife Jennifer, his sister Tryeone, and his parents. He is survived by sisters Cindy (Dennis) Moran of Cordillera, CO and Sara Perry of Akron, OH, brothers-in-law Brad (Deb) LaGrone of Deadwood, TX and Clay (Tami) LaGrone of Dallas, TX, godson Nick Shore of Stillwater, OK, goddaughter Katherine Blevins of Tulsa, OK, twelve nieces and nephews and six grandnieces and grandnephews. Marc had two apprentices- Jon Eppler, of Cleveland, OK and Anna Troy, of Harnosand, Sweden. He is also survived by countless other friends, family, friends who became family, colleagues, and other people who knew and loved him through his work. A memorial service for Marc will be held at the Tulsa Historical Society on Friday June 10th, 2022 at 11am. Graveside service will be on June 11th, 2022 at Deadwood Cemetery in Deadwood, TX. In lieu of flowers, please consider donating in Marc’s name to either Green Country Hospice or 12&12 Addiction Recovery Center.

The family of Marc Carlson created this Life Tributes page to make it easy to share your memories.

Send flowers to the Carlson family.