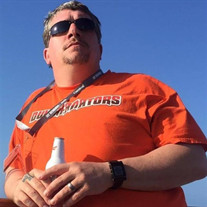 Marc “Meat” Sutton, 42, of Bartlesville, died Saturday in Bartlesville. Marc was born the son of Ronald Curtis Sutton and Charlene Kay Flock on December 2, 1976, in Grand Junction, Colorado. He was raised in Pueblo, Colorado, before moving with his father to Kansas for a short time and settling in Nowata, Oklahoma. On July 23, 1993, Marc met the love of his life Susan Forehand while out with friends in downtown Nowata. They tied the love knot on March 11, 1995, and made their home in Bartlesville. Marc and Susan grew up together and were best friends with a love that could be spotted a mile away. It wasn’t often that they weren’t right by each other’s side. Even though Marc was a tough guy he would do anything for his kids. Dealing out tough love when needed but also backing them up right or wrong until we got home. Marc was lucky to have kids that loved him as much as he loved them. He started the craziest of traditions for our family like delivering snack cakes to the kids at midnight the morning of their birthday no matter where they were at that moment. He was an amazing Papa and took to the role with pride. He enjoyed snuggling up with each of the grand kids and showing off his new toys to them. He mastered everything he did from cooking to sewing and construction to technology. He was a bartender and owned his own bar for a period and managed the Ice House and Banana’s around 2000. He had a Karaoke and DJ business with his brother Ira Henderson. He was ordained in the ministry. There wasn’t many things that Marc couldn’t do and he was always willing to jump Into anything new that came his way like most recently silk screening T-shirts. Marc made his career as a Welder after being hired by KC Welding/MGM in Bartlesville OK as a painter and was quickly moved to a welding position. Marc took to welding with an artist touch and passed numerous weld test receiving multiple welding certifications. He loved laying down a good bead and took pride in his work. One of Marc’s many passions in life was riding motorcycles: he was a longtime member of the Mongols Motorcycle Club but gave it up once his first grandchild was born, to spend more time with his family. For the past three years he has been a dedicated member of the Bartlesville Elks Lodge #1060, serving as the current Exalted Ruler for the past two and a half years. Marc was a born leader and took to everything he tried with ease. Marc was larger than life and was always joking and smiling usually with a Michelob Ultra in his hand. After much persuasion from his wife Marc took his first cruise and was instantly hooked and would start booking the next vacation before the current one was over. He was everyone’s brother and the guy his friends looked up too. Most of all he loved his family and spending precious time with them. He will be dearly missed. Marc is survived by his loving wife of almost 25 years Susan; two children, Nickolas Andrew Sutton and Ashli Dawn Sutton and her significant other Justin Young; one brother Phil Sutton; one sister Lisa Henderson; three grandchildren, Jaxton Michael Young, Kayson Lane Young and Anneliese Jade Sutton; one nephew Chase Sutton; and two nieces Kyla and Kiersten Sutton. He is preceded in death by his parents and brother Ira Henderson. Marc’s family will receive friends at the Davis Family Funeral Home – Walker Brown Chapel, 918-333-7665, 4201 Nowata Rd, Bartlesville, on Wednesday, September 4, from 5-7 p.m. Following the visitation on Wednesday everyone is welcome to come to the Elks lodge for a social gathering to remember Marc, please bring finger foods and a good story to help us celebrate his life. Visitation at Davis funeral home will also be held on Thursday from 9-12. Funeral services will be held 2 p.m. on Thursday, September 5, at the Bartlesville Elks Lodge #1060. Interment will follow in the Barnsdall Ethel Reece Cemetery. Services are under the direction of Carter Davis and the Davis Family Funeral Home – Walker Brown Chapel. Online condolences and remembrances may be shared at www.DavisFamilyFuneralHome.com. In lieu of flowers memorials may be made to the family.

Marc &#8220;Meat&#8221; Sutton, 42, of Bartlesville, died Saturday in Bartlesville. Marc was born the son of Ronald Curtis Sutton and Charlene Kay Flock on December 2, 1976, in Grand Junction, Colorado. He was raised in Pueblo, Colorado, before... View Obituary & Service Information

The family of Marc "Meat" Edmond Sutton created this Life Tributes page to make it easy to share your memories.

Send flowers to the Sutton family.