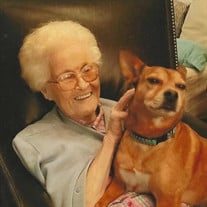 Marcia Mae (Snow) Hutchison, of Bartlesville, passed away May 18, 2021 surrounded by loved ones. She was born in Dewey, OK on March 12, 1927 to Henry B. and Orilla (Shelton) Snow. She attended Dewey Public Schools and graduated in 1945. After school, Marcia went to work in Bartlesville at the City Bus Station, doing their bookkeeping and scheduling. She worked there for three years. After that time, she was employed with Phillips 66 for 35 years until her retirement in 1985. While Marcia was working at the bus company she met Jim Hutchison, just back from WWII, through a mutual friend on a blind double date. Their first date was a picnic (Jim’s mother made fried chicken and potato salad). The picnic lunch must have done it, as they married March 9, 1950 and were married for 36 years when Jim passed in 1987. Marcia and Jim had a couple of years of traveling after her retirement. Not one to sit around, she kept busy taking care of their 11 acres (mowing her own lawn until she was in her mid-80s). She spent a lot of time with her many brothers and sisters (15 including her) and their families, having painting, craft and many get-togethers. She enjoyed playing bingo and Murphy’s was her favorite place to eat. She was willing to travel anywhere with anyone and was always ready to go. While not having any children of her own, she had a special bond with almost every niece and nephew, and there were many. She has been there for all of them at some point in their lives. Her house was a safe haven for anyone needing it. She was a lot of fun, full of advice, and always there if anyone needed her. Marcia stayed active until the past year or so and she had a great life. Marcia is survived by one brother Garry Snow (Linda) of Dewey, OK; sister-in-law, Karen Snow of Afton, OK; and her many nieces, nephews, and extended family she has gathered along the way. In addition to her parents, she was preceded in death by eight brothers, Henry Jr., Eldon, Frank, Calvin, Vernon, Gene, Tom, and Larry; and five sisters, Josephine Lowrey, Sue Seals, Pat Warehime, Betty Foster, and Linda Sisk. The family would like to thank her incredible caretakers, Doris and Angela, from the bottom of their hearts. They have been her angels. Marcia’s family will receive friends at the Davis Family Funeral Home & Crematory – Walker Brown Chapel, 918-333-7665, 4201 Nowata Rd, Bartlesville, on Sunday, May 23, from 3-5 p.m. Visitation will also be held on Sunday from 12-5, and Monday 9-1. In lieu of flowers memorials may be made to the Washington County SPCA, 16620 OK-123 Dewey, OK 74029. Funeral services will be held 2 p.m. on Monday, May 24, at the Davis Family Funeral Home & Crematory – Walker Brown Chapel. Interment will follow in the Memorial Park Cemetery. Services are under the direction of Carter Davis and the Davis Family Funeral Home & Crematory – Walker Brown Chapel. Online condolences and remembrances may be shared at www.DavisFamilyFuneralHome.com.

Marcia Mae (Snow) Hutchison, of Bartlesville, passed away May 18, 2021 surrounded by loved ones. She was born in Dewey, OK on March 12, 1927 to Henry B. and Orilla (Shelton) Snow. She attended Dewey Public Schools and graduated in 1945. After... View Obituary & Service Information

The family of Marcia Mae Hutchison created this Life Tributes page to make it easy to share your memories.

Marcia Mae (Snow) Hutchison, of Bartlesville, passed away May...

Send flowers to the Hutchison family.