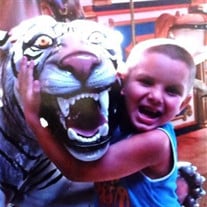 Marcus Eli Perdasofpy-Leal was granted his angel wings on April 25th 2016. A car accident in 2012 left Marcus in critical condition. However, he possessed strength, perseverance and the ability to overcome incredible odds and physical challenge over the last few years. His life is a reminder of what a blessing it was to create lasting memories. Marcus's life would seem short too many but those he came in contact with were touched by him, his gentle smile and bright blue eyes, which would easily melt the hearts of those around him. He had an artisan soul. He loved to be creative, draw, paint and bake cupcakes. He was drawn to everything beautiful including the great outdoors. He would create houses and little structures with sticks, rocks, dirt and anything he could find. The artist in him drew him to all kind of colors, textures and forms. However, his favorite color was green. His caring nature was not only shown by his enjoyment from planting and taking care of flowers, but also through his interaction with his family members. Marcus loved to help. He would follow anyone around and look for ways to be helpful. When it came to his cousins and sister he was doting and very loving. He was exceptionally kind and compassionate. His love was so freely given. He was a cuddler, a hugger and he loved to lay a big wet one on your lips! Being in his presence you could just feel his love for you. It was a beautiful gift and one that drew so many to him. Marcus also loved music and to dance. That boy had some moves. We recall a time when at the Kiddie Park he got up on the middle stage and danced for what seemed an hour. People would stop to watch him, they clapped and cheered him on. He was not afraid to break it down and he didn't care who was watching. With Marcus' passing it reminds others that life is one to be celebrated and to break it down no matter who is watching. We will miss him with each passing day Marcus leaves behind his loving mother, Jordan Chelsea Garza, sister, Isabel Leal of Florida, grandparents, Syliva Starr, Jerry & Trish Perdasofpy, and Michelle & Adam Duncan. Marcus has many aunts, uncles and cousins including: Whitney Virden, Paige Perdasofpy, Brook Barnes and Brandy Shaffer. He is predeceased by his father, Mark Robert Leal Jr.

Marcus Eli Perdasofpy-Leal was granted his angel wings on April 25th 2016. A car accident in 2012 left Marcus in critical condition. However, he possessed strength, perseverance and the ability to overcome incredible odds and physical challenge... View Obituary & Service Information

The family of Marcus Eli Perdasofpy-Leal created this Life Tributes page to make it easy to share your memories.

Marcus Eli Perdasofpy-Leal was granted his angel wings on April...

Send flowers to the Perdasofpy-Leal family.