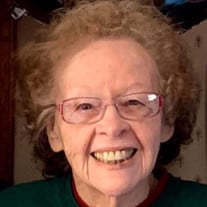 Margaret Ruth Duncan, 86, of Dewey, died peacefully with her children by her side Friday in Dewey. She is in the arms of her Lord and Savior but Grandma Ruth will be missed by her family and friends. Ruth was born the daughter of Charlie and Shelly (Carr) Bias on December 10, 1934, in Porter, OK. Her family were sharecroppers who followed the harvest throughout eastern Oklahoma. Once old enough to strike out on her own Ruth came to Bartlesville for work. Ruth decided to raise her family in the Bartlesville and Dewey area. She worked for the Bartlesville Public Schools, ending her career as head baker at Central Middle School. Mutual friends set Dale and Ruth up on a blind date. Dale arrived looking spiffy in a suit and the rest is history - they were united in marriage on March 24, 1986. Ruth’s children took to Dale quickly and over their 30-year marriage appreciated his commitment to their mother and family. Ruth was a faithful Christian and longtime member of the Dewey Church of the Nazarene. She read her bible daily, prayed often, and found joy in teaching Sunday School and being active in the various activities of the church. Dale and Ruth were good stewards of God’s blessings and they bought and managed investment properties. In their free time the couple hosted Friday night jam sessions with friends playing Country Western and Gospel music. Most of all Ruth loved her family and cherished the time spent with her precious grandchildren. She was a loving and Godly example whose sweet smile and gentle spirit will be dearly missed. Ruth is survived by her children, Linda Sawyer and Bobby of Broken Arrow, Rose Peace of Owasso, Teresa McSparrin and Billy of Springdale, AR, and James Baughman and Katrina of Bartlesville; nine grandchildren, Bobbi Sawyer Lucas and Rhett, Scott Sawyer and Amber, Lacey Deckard, Garrett Kitchel, Lane Kitchel, Trey Kitchel, Blake Baughman and Cameron Baccus, Will Baughman and Madi Baughman; and eight great grandchildren, Sawyer, Blane, Drew, Kolton, Kayliegh, Tayson, Halley, Christina and Savannah. She is preceded in death by her parents, beloved husband Dale, daughter Lisa Kitchel, grandson Arlen Deckard, seven brothers and seven sisters. Ruth’s family will receive friends at the Davis Family Funeral Home – Dewey Chapel, 918-534-3030, 113 S. Osage (Hwy. 75), Dewey, on Monday, 6-8 p.m. Visitation will also be held on Monday from 10-8. Funeral services will be held 10 a.m. Tuesday, at Dewey Church of the Nazarene, with Rev. Joel Heid officiating. Interment will follow in the Dewey Cemetery. Services are under the direction of Carter Davis and the Davis Family Funeral Home – Dewey Chapel. Online condolences and remembrances may be shared at www.DavisFamilyFuneralHome.com.

Margaret Ruth Duncan, 86, of Dewey, died peacefully with her children by her side Friday in Dewey. She is in the arms of her Lord and Savior but Grandma Ruth will be missed by her family and friends. Ruth was born the daughter of Charlie and... View Obituary & Service Information

The family of Margaret Ruth Duncan created this Life Tributes page to make it easy to share your memories.

Margaret Ruth Duncan, 86, of Dewey, died peacefully with her...

Send flowers to the Duncan family.