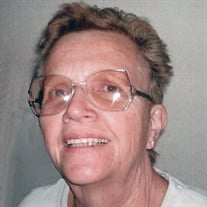 Marian Johnson, 82, of Bartlesville, died Monday in Bartlesville. She was a faithful follower of Christ and loved the Lord, serving others and children. Marian was born the daughter of Marion Clifford and Ruth (Frantz) Schorr on May 19, 1939, in Cincinnati, Ohio. The family later moved to Milwaukee where she received her education, graduating from Riverside High in 1958. Growing up she played second base and enjoyed ice skating. It was actually the day that Marian graduated that George first met her - while out with friends he came across her and he was attracted to the redhead’s quick wit. They quickly married and made their home in Milwaukee. Upon his honorable discharge from the U.S. Army, they moved to Ponca City to make their home for the next 45 years. Once the boys were older, Marian went to work for the Ponca City School system. Marian was recognized with an award for employee of the month stating “She pioneered the test hot lunch program at Washington Elementary, worked in the East Junior High Kitchen, was a contract custodian for Roosevelt Elementary and works with the Teen-Prep program at First Baptist Church. Marian has a genuine concern for students and their safety. She is rarely gone from her duties and has an upbeat attitude.” After 29 years of devoted service, Marian retired in 2001. In 2005 Marian and George moved to Bartlesville to be nearer their children. Marian loved to serve others, especially children – she loved the Lord her Creator and it was what He called her to do. In addition to her job and being active in her own children’s activities, Marian was a cub scout leader who helped boys grow and become young men of character. She coached YMCA baseball and the boys called her Coachette. Later Marian served as Patriotic Instructor at the Disabled American Veterans Auxiliary (DAV) chapter and Chaplain at the Bartlesville Eagles Auxiliary. Marian and George simply enjoyed each other’s company, raising kids, spending time together and trips to Branson. They fished, camped and loved beading and teaching others. She collected her dancing suncatchers that are distinctively displayed in her living room window for all to enjoy as well as music boxes. She was beautiful in every way and will be dearly missed. Marian is survived by her loving husband of 63 years George; two sons George (Linda) Johnson, and David (Gail) Johnson; brother Scott Schorr; sisters Laura Schorr and Pat (Jim) Wiseman; two grandsons Jeremy (Raven) Johnson and Blaine (Donica) Johnson; seven great grandchildren, Nick (Kiana) Johnson, JJ Johnson, Gabe Johnson, Jesse Johnson, Landon Watson, Kenzie Watson and Brenna Johnson; and two great grandchildren Orion and Dia. She is preceded in death by her parents and sister Glady Louise Gromacki. Marian’s family will receive friends Thursday, from 6-7 p.m., at the Davis Family Funeral Home – Dewey Chapel, 918-534-3030, 113 S. Osage (Hwy. 75), Dewey. Visitation will also be held Thursday 10-8 and Friday 9-12. Graveside services will be held 2 p.m. on Friday, at the Dewey Cemetery, with Rev. Waymond White officiating. Services are under the direction of Carter Davis and the Davis Family Funeral Home – Dewey Chapel. Online condolences and remembrances may be shared at www.DavisFamilyFuneralHome.com.

Marian Johnson, 82, of Bartlesville, died Monday in Bartlesville. She was a faithful follower of Christ and loved the Lord, serving others and children. Marian was born the daughter of Marion Clifford and Ruth (Frantz) Schorr on May 19, 1939,... View Obituary & Service Information

The family of Marian Ruth Johnson created this Life Tributes page to make it easy to share your memories.

Send flowers to the Johnson family.