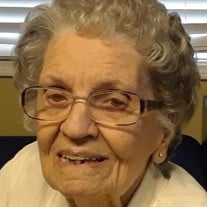 Marian Melcena Mattix, 94, went to her heavenly home on January 26, 2021. Marian was born in Webb City, OK on October 27, 1926 to John Ford and Mary Ina (DeGraffenreid) Bradford, and she was the youngest of three daughters. She graduated from Shidler High School and shortly after moved to the Bartlesville area where she began working for Phillips as an administrative assistant. She was an avid roller skater and one evening met Henry Francis Mattix at the local roller rink. The couple married on November 29, 1946 in Coffeyville and had their two children, David and Judith. Marian was an active member in the community all throughout her life. She was a charter member of the Sunset Country Club, a member of the Order of the Eastern Star, and later she also became a member of the 55+ Activity Center. Both Marian and Henry golfed at the Sunset Country Club and would compete and travel all over the country in individual and couples golf tournaments. The couple was also known for competing in local bowling leagues, as well. In her free time, Marian enjoyed sewing, quilting and knitting. She would fondly remember all of the hats she had knitted for the hospital for newborn babies. During their marriage Henry was the one who was known for cooking in the household, although she would later learn to cook a few dishes well. She was also a proud member of the Dewey United Methodist Church. In addition to her parents, Marian was preceded in death by her loving husband of 59 years, Henry; her two older sisters, Elizabeth Ann Rumbaugh and Katherine Briggs; and her grandson, Kyle Crank. She is survived by her son, David Michael (Mike) Mattix and wife Cathy of Jenks; daughter, Judy Lynn Mattix of Bartlesville; three grandchildren, Brian Mattix, Jessica Mattix, and Christina Mattix; five great-grandchildren, William Mattix, Kaylah Peoples, Kelise Williams, Montaya Williams, and Korbin Peoples; as well as a host of nieces, nephews, and other family members. Visitation will be held on Thursday, January 28th from 10-8 and Friday from 10-1. At Davis Family Funeral Home and Crematory – Walker Brown Chapel, 918-333-7665, 4201 Nowata Rd, Bartlesville. A Graveside Service will be held at 3 p.m. on Friday, January 29th, at Memorial Park Cemetery. Services are under the direction of Carter Davis and the Davis Family Funeral Home and Crematory – Walker Brown Chapel. Online condolences and remembrances may be shared at www.DavisFamilyFuneralHome.com.

Marian Melcena Mattix, 94, went to her heavenly home on January 26, 2021. Marian was born in Webb City, OK on October 27, 1926 to John Ford and Mary Ina (DeGraffenreid) Bradford, and she was the youngest of three daughters. She graduated from... View Obituary & Service Information

The family of Marian Melcena Mattix created this Life Tributes page to make it easy to share your memories.

Marian Melcena Mattix, 94, went to her heavenly home on January...

Send flowers to the Mattix family.