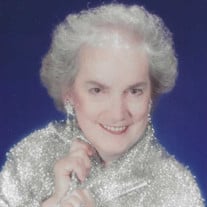 Marilyn Sue Edington, 85, of Dewey, died Sunday, May 9, 2021. Marilyn was born on October 3, 1935 in Elk City, Kansas, to Holden White and Lula Powell White in the back room of their house. Her early years were spent riding her Shetland pony, Smoky, and her other horse, Trigger, going to rodeos and visiting aunts, uncles, grandparents and cousins. She loved her horses, her dogs and cats, fried chicken and homemade ice cream. As an only child, Marilyn played with her paper dolls and her Boston Bull Terrier, Twinkle. She grew up on the corner of the main street of Elk City in the house with two front doors, one for the home and one for the entrance to the family’s Powell Telephone Company, where Marilyn spent many hours at the switchboard as a telephone operator. When she was about seven, her grandpa White taught her to chord on the piano. She took music lessons from her favorite teacher, Mrs. Manley, for many years. After that time, she played the piano and organ for many marriages, funerals and many events. Her love of music never wavered. Marilyn played the clarinet in the school band and graduated as Valedictorian from Elk City High School in May 1953. Marilyn married Robert E. Inlow and started her family. Later, she married Ron Edington. She gave piano lessons, took in ironing and babysat, all at the same time, to make ends meet in her twenties. She was always busy. She was associated with the Washington County Tag agency from 1964 to the mid-1980’s. At one time, she was State Treasurer of the Motor License Association. Among her many crafts was carpentry work, painting new malls, truck hauling, working in the fabric department at Walmart, and finally retiring at age 80, after fifteen years in Medical Records at Jane Phillips Hospital. In the meantime, Marilyn was always trying a new recipe. She took up quilting, was an active member of the Caney Valley Antique Power Association, learned to play the ukulele and loved playing the dulcimer with her friends of the Joyful Strings. She taught Sunday School and played for church all her adult life. She was a longtime member of Free Will Baptist Church of Dewey. She was always up for a new adventure. Her final unexpected adventure this week and was dooziest of them all! We are sure she is already learning to play the heavenly harp. In addition to her parents, Marilyn was preceded in death by her husband, Ron Edington (July 2015) and her son-in-law, Dale (Shorty) Egnor (December 2020). She is survived by her children, Rita Bibles (Alan Pettigrew), Brenda Rouse (Jay), Randy Inlow, and Lori Jo Egnor; her grandchildren, Valerie Bellenger, Cassie Turnage (Kragen), Blake Bibles, Ronnie Lee Davis (Michelle), Melissa Hirschman (Andy) and Jamie Birkes (Michael); and nine great-grandchildren, Kaylin, Kinzie, Claire, Zaynia, Abbey, MaKenna, Josie, Moxon and Sawyer. Marilyn’s family will receive friends at the Davis Family Funeral Home – Dewey Chapel, 918-534-3030, 113 S. Osage, Dewey, on Wednesday, May 12, from 6-8 p.m. Visitation will also be held on Wednesday from 10-8. Funeral services will be held 10 a.m. on Thursday, May 13, at the Davis Family Funeral Home – Dewey Chapel with Pastors Wayne and Ken Peace officiating. Interment will follow in the Timpson Chapel Cemetery in Vinita. Services are under the direction of Carter Davis and the Davis Family Funeral Home – Dewey Chapel. Online condolences and remembrances may be shared at www.DavisFamilyFuneralHome.com.

Marilyn Sue Edington, 85, of Dewey, died Sunday, May 9, 2021. Marilyn was born on October 3, 1935 in Elk City, Kansas, to Holden White and Lula Powell White in the back room of their house. Her early years were spent riding her Shetland pony,... View Obituary & Service Information

The family of Marilyn Sue Edington created this Life Tributes page to make it easy to share your memories.

Send flowers to the Edington family.