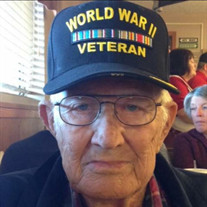 Marion Vincent Ross, Navy veteran and longtime Bartlesville resident, died Wednesday in the hometown of his making. He was 94 and blessed with a long life filled with bravery, work that he enjoyed, and many generations of sweet love. Marion was born the son of Herbert Edgar and Mary Louise (Buichini) Ross on July 9, 1925, in Amarillo, TX. His father was an engineer for the Burlington Northern railroad and his mother was a no-nonsense Italian housewife. His parents shaped and influenced him during his formative years. Marion along with his five siblings grew up in Amarillo and learned the value of hard work from an early age. Before graduating high school, Marion boldly enlisted in the U.S. Navy and served in the Pacific on the USS Almaack, an attack cargo ship, as a gunner in its engine room during World War II. Once honorably discharged he completed his education graduating from Amarillo High School in1948. Marion moved to Bartlesville to work for his childhood friend who owned Jim Diamond Construction, only retiring after 50 years of loyal service as his foreman. It was another bold move that paid off immeasurably with the blessings of a fulfilling, one-job career and most importantly, a loving wife, companion and mother to his children. So, soon after arriving in Bartlesville Marion got to meet a lovely young lady at a local dance and he soon convinced Maureen Elizabeth Tanner she was the lucky one. They united in marriage, raising their five children in Bartlesville in a home that they would spend the next 57 years in. Marion and Maureen enjoyed doing many things together. Oftentimes, Maureen would describe something she wanted built from wood, and once Marion got it ready for his bride, she decorated and painted it up, and these husband-and-wife crafts would become special gifts for family and friends. Over the years Marion was the go-to guy for his knowledge of construction and carpentry. He always considered himself a carpenter first even though he managed many of Jim’s construction projects through the years. Most of all Marion loved his family and spending precious time with his many grandchildren. He was always active and rambled around his garage and helped others in whatever ways he could. Although some may have seen this construction foreman as a “tough guy” Marion always had a special place for his teacup yorkie Sweetie Pie - all four of them! Sweetie Pie the Fourth preceded him in death just recently. Marion is survived by three children, Debbie Mouse and John, Janet Foran and Randy, and Pam Zora and Russ; 11 grandchildren and 27 great grandchildren. He is preceded in death by his parents, wife Maureen in 2008, son Tom Ross, daughter Peggy Trammel, as well as four brothers and one sister. Graveside services will be held 10 a.m. on Saturday, at the Memorial Park Cemetery. Services are under the direction of Carter Davis and the Davis Family Funeral Home & Crematory – Walker Brown Chapel. Online condolences and remembrances may be shared at www.DavisFamilyFuneralHome.com.

Marion Vincent Ross, Navy veteran and longtime Bartlesville resident, died Wednesday in the hometown of his making. He was 94 and blessed with a long life filled with bravery, work that he enjoyed, and many generations of sweet love. Marion... View Obituary & Service Information

The family of Marion Ross created this Life Tributes page to make it easy to share your memories.

Send flowers to the Ross family.