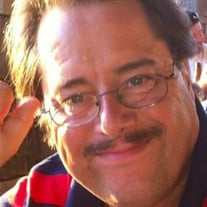 Mark Bryan Walker, 51, of Norman, died August 27, 2016, in Oklahoma City, after battling cancer. Mark was born March 3, 1965, in Bartlesville, OK, to Joseph F. Walker Sr. and Rosemary June Walker. He graduated from Bartlesville High School in 1983 and went on to earn an associate’s degree in communications from Northern Oklahoma College in Tonkawa, OK, and a dual bachelor’s degree in political science and history from Pittsburg State University in Pittsburg, Kansas. On October 13, 1995, he married Kelly King and lived in Bartlesville. That marriage ended in divorce. On November 3, 2010, he married Tanja (Clevenger) Edwards and moved to Norman. While in Bartlesville, Mark worked at a number of jobs, from deputy county assessor to food stamp worker for the Department of Human Services to job coach for people with developmental disabilities. After moving to Norman, he worked at Walmart, most recently as a cashier. He had been attending Rose State College to pursue paralegal studies until he became ill in the spring. Mark had a passion for movies, especially classics, disaster films, and George Romero pictures. He was passionate about ending gun violence and was a member of Moms Demand Action. He had just become a member of First Christian Church of Norman when he became ill. Prior to that, he had been a member of West Wind Unitarian Church in Norman. Survivors include his wife, Tanja, of the home, a daughter, Kayla Walker, Rolla, MO; two stepchildren, David Edwards and Donna Edwards, both of Norman; his mother, June Walker, Bartlesville; one brother, Joe (Judy) Walker, Bartlesville; two sisters, Fi Choate and Jeanne (Allen) Hill, both of Denver; four nieces and nephews, and seven great-nieces and nephews. He was preceded in death by his father, brother-in-law Jerry Choate, and one niece. Memorial contributions can be made to: Everytown for Gun Safety, http://donate.everytown.org or to the American Cancer Society. Memorial services in Norman will be held at 11 am Friday, September 2, 2016, at First Christian Church, 220 S. Webster, Norman, OK. Services in Bartlesville will be held at 2 pm Saturday, October 15, 2016 at Walker-Brown Funeral Home, 4201 E. Nowata Road, Bartlesville, OK. Online condolences for the family can be made at www.walkerbrownfuneralhome.com.

The family of Mark Bryan Walker created this Life Tributes page to make it easy to share your memories.

Send flowers to the Walker family.