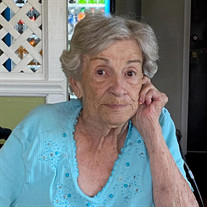 Martha Roth, longtime Copan resident, was 88 when she died Friday in Copan surrounded by her loving family. She was born in Copan and was always proud of her hometown. Martha was born the daughter of Lloyd Alfonzo and Martha Ruby (Reese) Medearis on September 14, 1932, in Copan. She was raised and educated in Copan with the class of 1951. During this time she formed very strong bonds with her siblings whom she loved dearly. Family was everything to her. Martha met the love of her life Bud Roth and they married on September 9, 1948. After making their first home in Pasadena, TX, they quickly realized that home was in Copan and they returned. Together Martha and Bud opened Copan Western Auto and later the Copan Café which they ran for several years. Later in life she started working for Phillips Petroleum Company, first on the switchboard and later in the travel department, before finally retiring in 1992. After 52 years of loving marriage, Bud preceded her in death on December 14, 2000. When the kids were young the family took many wonderful camping trips to Colorado. Bud and Martha enjoyed many memorable trips together. She enjoyed spending time with her family - going on many girl trips over the years and numerous family trips to Destin, Florida. Martha enjoyed crocheting and sewing. Martha is survived by her children, Brenda Farmer and David, Dannie Roth and Sue Thomas; brother Paul Medearis; sister Norma Sas; four grandchildren Laurie Booth and Randall, Lance Knight and Angel, Luke Thomas, and Amanda and Troy Thomas; five great grandchildren, Keri, Destiny, Mia, Hunter, Boyd; and numerous nieces and nephews whom she loved dearly. Also her beloved fur baby of 16 years, Buddy Lee. She is preceded in death by her parents; husband Bud; brother Alfred Medearis; sisters Verla Morris, Lois Wassom and Donna Stewart; and son in law Greg Thomas. Martha’s family will receive friends at the Davis Family Funeral Home – Dewey Chapel, 918-534-3030, 113 S. Osage (Hwy. 75), Dewey, on Tuesday, from 6-8 p.m. Visitation will also be held on Tuesday from 12-8 and Wednesday 9-12. Martha’s family would like to thank Bartlesville Health & Rehab and the angels from Comforting Hands Hospice for their excellent care. Funeral services will be held 2 p.m. on Wednesday, at the Dewey Cemetery. Services are under the direction of Carter Davis and the Davis Family Funeral Home – Dewey Chapel. Online condolences and remembrances may be shared at www.DavisFamilyFuneralHome.com.

Martha Roth, longtime Copan resident, was 88 when she died Friday in Copan surrounded by her loving family. She was born in Copan and was always proud of her hometown. Martha was born the daughter of Lloyd Alfonzo and Martha Ruby (Reese) Medearis... View Obituary & Service Information

The family of Martha Pauline Roth created this Life Tributes page to make it easy to share your memories.

Martha Roth, longtime Copan resident, was 88 when she died Friday...

Send flowers to the Roth family.