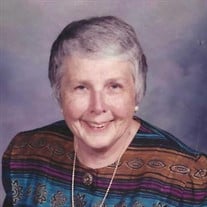 Mary Lou Bresson, 85, lifelong Bartlesville resident, went to be with her Lord and Savior on Tuesday, October 20th. Mary Lou was born to Joseph Patrick and Freda Mayora (Eberhart) Lannan on June 24, 1935, in Bartlesville. She had two brothers, Joe and Mike, and the family were devout members of the St. John Catholic Church. Mary Lou graduated from Bartlesville College High School in 1953. After high school, she worked at First Investment Company. The church played a significant role throughout her life, especially since it was where she met Clarence Richard ‘Dick’ Bresson while playing croquet during a church picnic. The two would later marry on July 2, 1960, at the St. John Catholic Church. Mary Lou and Dick made their home in Bartlesville. They had one son, Michael, and two daughters, Helen and Rhonda. Mary Lou was a loving mother who loved to cook and bake; her specialties being lasagna, chocolate chip cookies, apple cake and apple pie. She was a known volunteer in the community. She was a Brownie Leader, volunteered with College High Band Boosters, and chaperoned band trips. She loved to play card games, particularly bridge and shanghai rummy, as well as yard games like croquet and badminton. She worked for many years as the secretary at St. John Catholic School. Mary Lou loved her family. One of her favorite events was the annual Lannan Family Reunion that she and brothers established in 1999. She also loved spending time with her grandchildren and great-granddaughter. Mary Lou was preceded in death by her husband, her parents, and older brother, Joe Lannan. She is survived by her three children, Michael Bresson and Sheila of Houston, TX, Helen Bresson of Bartlesville, OK, and Rhonda Braselton and Lon of Allen, TX; younger brother, Mike Lannan of Kerrville, TX; five grandchildren, Ricky Bresson, Jake Braselton, Sarah Braselton, Sean Bresson, and Declan Bresson; one great-granddaughter, Carolina Bresson; numerous cousins, nieces and nephews; and her faithful four-legged companion Bart. The family would like to give special thanks to Rivercross Hospice and to the Visiting Angels for their wonderful care and support. Mary Lou’s family will receive friends at the Davis Family Funeral Home and Crematory – Walker Brown Chapel, 918-333-7665, 4201 Nowata Rd, Bartlesville, on Thursday, October 22, from 6-7 p.m. A Rosary will be said on Thursday at 7p.m. at the Davis Family Funeral Home & Crematory – Walker Brown Chapel. Visitation will also be held on Thursday from 10-8 p.m. Funeral Mass will be held Friday, October 23, at 10 a.m. at St. John Before the Latin Gate Catholic Church. Interment will follow at Memorial Park Cemetery in Bartlesville. In lieu of flowers, donations can be made to St. John Catholic School, 816 S Keeler Ave, Bartlesville, OK 74003, in memory of Mary Lou. Services are under the direction of Carter Davis and the Davis Family Funeral Home and Crematory – Walker Brown Chapel. Online condolences and remembrances may be shared at www.DavisFamilyFuneralHome.com.

Mary Lou Bresson, 85, lifelong Bartlesville resident, went to be with her Lord and Savior on Tuesday, October 20th. Mary Lou was born to Joseph Patrick and Freda Mayora (Eberhart) Lannan on June 24, 1935, in Bartlesville. She had two brothers,... View Obituary & Service Information

The family of Mary Lou Bresson created this Life Tributes page to make it easy to share your memories.

Send flowers to the Bresson family.