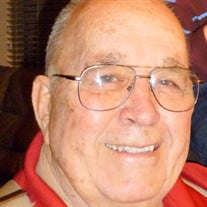 Melvin Howard Adler, U.S. veteran, Phillips retiree, and longtime Dewey resident, died Monday in Dewey. He was 96 and had lived a long and fruitful life. Melvin was born to Frank Harvey and LoDessa (Allen) Adler on June 21, 1924, in Maramec, OK. Melvin’s fondest memories of growing up was playing basketball and making trips to Pawnee, OK, with Grandpa Coy to watch talking films aka movies. After graduating from Maramec High School as salutatorian in 1942, he went to work for the FBI in Washington DC before being drafted into the U.S. Army Air Corps. Melvin served as a key punch operator stationed throughout Europe before his honorable discharge. Once home Melvin used the GI Bill to attend Univ. of Tulsa and earned his bachelor’s in business administration. His first job out of college was selling pots and pans door to door which was easy for the natural born salesman. During this time, he met Wanda Hanoch at the local ice rink and they quickly fell in love. They got married Nov. 22, 1949, after winning the first ever Channel 6 on-air wedding, a cherished memory for both lovebirds. Melvin started his long career with Phillips Petroleum Co. in Houston before transferring to Kansas City in 1959, later to Bartlesville in 1969, finally retiring in 1985. Melvin and Wanda then started their next career with Melvin’s M&W Campers and Wanda’s Mini Mansion in Dewey. After 57 years together, Wanda preceded him on Dec. 7, 2006. Melvin’s passion in life was doing whatever Wanda asked him to do and indulging his sweet tooth. He loved to sell and friends often commented he could “sell whitewash to an Eskimo.” Together Melvin and Wanda gardened, kept up their Koi ponds, raised miniature horses and doted on their beloved Yorkies. For years they traveled in their motor home, selling miniatures along the way. Melvin is survived by his son Daniel (Jane) Adler; three grandchildren, Matthew (Crystal) Adler, Jessica (Brandon) Eckert, and Derrick Herard; and five great grandsons, Brody, Barrett, Brock, Brody and Jared. He is preceded in death by his parents, wife, son Roger Allen Adler and sister Helen Irene Ellington. Melvin’s family will receive friends at the Davis Family Funeral Home & Crematory – Walker Brown Chapel, 918-333-7665, 4201 Nowata Rd, Bartlesville, on Sunday, from 3-5 p.m. Visitation will also be held Sunday from 12-5. Funeral services will be held 12:30 p.m. Monday, at Floral Haven Cemetery in Broken Arrow. Services are under the direction of Carter Davis and the Davis Family Funeral Home & Crematory – Walker Brown Chapel. Online condolences and remembrances may be shared at www.DavisFamilyFuneralHome.com.

Melvin Howard Adler, U.S. veteran, Phillips retiree, and longtime Dewey resident, died Monday in Dewey. He was 96 and had lived a long and fruitful life. Melvin was born to Frank Harvey and LoDessa (Allen) Adler on June 21, 1924, in Maramec,... View Obituary & Service Information

The family of Melvin Howard Adler created this Life Tributes page to make it easy to share your memories.

Send flowers to the Adler family.