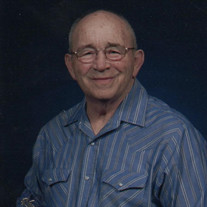 Melvin Leon Call, 84, of Copan, died Wednesday in Bartlesville. The loving husband and father was devoted to his family, his country and his Savior. Melvin was born the son of Harold Arnold and Katherine Leona (Cummings) Call at his grandmother’s home on September 2, 1937, in Sedan, KS. Along with his younger brother LeRoy, Melvin was raised outside of Sedan, oftentimes getting in trouble with their mother over missing curfew on a regular basis. Their father was an avid coon hunter and Melvin developed a passion for hunting from a young age. Melvin graduated from Sedan High School in 1956. He faithfully served and was honorably discharged from the U.S. Army. While running around Bartlesville, OK, one day he met the soon-to-be love of his life Mary Werts. As the story goes, Melvin quickly fell in love and Mary let him, and they united in marriage on April 15, 1961 in Bartlesville. They made their home in Wann before settling in Copan where they raised two children Vickey and Mark. Melvin started working his father’s oil leases and rigs from a young age. He found his career as a home builder, Call Construction, building many spec and custom homes over the years including his own. With Mary by his side, Melvin was active in his children grandchildren’s and great grandchildren’s lives and attended their many sporting and school events, cheering them on. Together with Mary, Melvin loved to play cards and oftentimes they would visit with their friends at the card table. He loved nature and the outdoors almost as much as he loved his family. He had his deer stand just a few feet from the house and he enjoyed hunting deer and quail, and fishing. He also enjoyed putting out a big garden every year, growing tasty vegetables and tomatoes to eat and to share. Melvin was always put together but his greatest accessory was his gentle smile. He was laid back and he was content to live a quiet life and in particular, he enjoyed watching his grandchildren and great grandchildren grow. He will be dearly missed. Melvin is survived by his loving wife of 60 years Mary; children Vickey Pitts and partner Rickey Applegate, and Mark Call; brother LeRoy Call and Sheri, 5 grandchildren, Blake Evans, Heather Evans, Lucrecia Evans, Mika Hunter and Travis, and David Call and Leah; 7 great grandchildren, Alexis, Clayton, Myah, Alexis Payten, Luke and Kennedy; nephew HC Call and Emily; and great aunt Georgia Call. He is preceded in death by his parents and sister-in-law Henry May “Babe” Call. Services will be held 10 a.m. on Monday, Dec. 13, at the New Life Wesleyan Church, with Rev. Warren Peck officiating. In lieu of flowers, memorials may be made in Melvin’s memory to a charity of the donor’s choice. Services are under the direction of Carter Davis and the Davis Family Funeral Home – Dewey Chapel. Online condolences and remembrances may be shared at www.DavisFamilyFuneralHome.com.

Melvin Leon Call, 84, of Copan, died Wednesday in Bartlesville. The loving husband and father was devoted to his family, his country and his Savior. Melvin was born the son of Harold Arnold and Katherine Leona (Cummings) Call at his grandmother&#8217;s... View Obituary & Service Information

The family of Melvin Leon Call created this Life Tributes page to make it easy to share your memories.

Send flowers to the Call family.