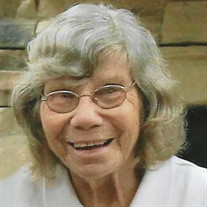 Merie Audrey Wedelin, 83, of Copan, left this earth on March 9, 2021. Merie was born Oct. 25, 1937, to Niles Charles and Sara Ellen (Davis) Blodgett in Mitchell, SD. She was the youngest of five children, and had a twin sister who passed away at a young age. The family moved from South Dakota to Miami, OK, where Merie attended school. Merie would later move to Independence, KS, where she spent most of her adult life. On June 30, 1979, Merie married her forever love Pete Tyler Wedelin at Grace Memorial United Methodist Church. There, in Independence, they made their home before moving to Copan. Merie was a Certified Nurse’s Aide (CNA) at The Manor Nursing Home in Independence where she lovingly cared for all the residents. She also later worked as a factory line worker at ACC before becoming co-owner of ‘Pete’s Shop’ where she and Pete patiently restored furniture. The duo took many of their projects to Tulsa area flea markets, finding many friends along the way. They had the biggest hearts around and were always the first ones to drop whatever they were doing to help someone however they could. Merie and Pete shared a robust love for fun and tormenting each other, always being onery and laughing together. The two worked together in their yard, Pete planting vegetables while Merie tended to her enormous flower garden. Their home in Copan was known in the community as ‘the flower house’. Merie was also famous for her baking, especially cakes which she made for any occasion from birthdays to weddings. Merie is preceded in death by her parents; sister Dale Thomas; two brothers James and Patrick Blodgett; twin sister Magel Blodgett; grandson Tyler and granddaughter Adrian. She is survived by her loving husband Pete Tyler Wedelin; six children Magel Taylor and husband Doug, Kathleen Bertrand (deceased) and husband Brian, Kenny Vineyard and wife Jan, Pete Wedelin, Sharon Melton and husband Jim, and Kelly Bradley and husband Sam; 15 grandchildren, B.J., Patricia, Michelle, Jeffery, Jennifer, Chris, Stacy, Jessy, Jeffrey (Scotty), Melanie, Brent, Trisha, Stephanie, Krysta, and Tyler; 25 great-grandchildren Jennings, Marshall, Kasen, Riley, Reese, Kacie, Taylor, Sydney, Khloee, Jacob, Dani, Trenton, Logan, Abigail, Elizabeth, Damien, Angel, Zoey, Devin, Zella, Sebastian, Alex, Connor, Benjamin, and Delilah ; one great-great-grandson Zachary, as well as other family and dear friends. A Celebration of Life will be held 2 p.m. on Saturday, March 13, at the Davis Family Funeral Home - Dewey Chapel. Services are under the direction of Carter Davis and the Davis Family Funeral Home -Dewey Chapel. Online condolences and remembrances may be shared at www.DavisFamilyFuneralHome.com.

Merie Audrey Wedelin, 83, of Copan, left this earth on March 9, 2021. Merie was born Oct. 25, 1937, to Niles Charles and Sara Ellen (Davis) Blodgett in Mitchell, SD. She was the youngest of five children, and had a twin sister who passed away... View Obituary & Service Information

The family of Merie Audrey Wedelin created this Life Tributes page to make it easy to share your memories.

Merie Audrey Wedelin, 83, of Copan, left this earth on March...

Send flowers to the Wedelin family.