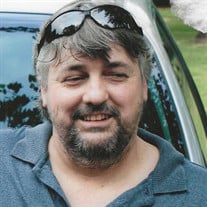 Michael Dale Brumley, 57, died Friday in Bartlesville, the city where he was born and returned home to. He joins his father and brother on the other side but will be missed by his mother, sister, other family and friends. Michael was born on December 17, 1963 to Wyman Dale Brumley and Earline Louise (Van Atta) Brumley. When he was still little, Michael’s family moved to Independence, Missouri where he attended grade school. Later, he attended middle and high school in Eldorado, Kansas. In high school he played varsity baseball and football. He loved sports and as an adult he coached little league baseball. After graduating high school with the Class of 1982, Michael went to work helping his father with car repairs and construction work. Later he would travel for large construction projects such as shopping malls and security systems. He trained as an electrician and worked for electrical systems for 21 years. After Michael returned to Bartlesville, he worked at Lucas Metal Works and Jane Phillips Hospital. He also used his skills and hands-on experience to help his mother with an addition to her home where Michael was responsible for both the electrical and tile work. Along the way, Michael had a son Christopher. He also loved and doted on his rescue dog, Shadow the Pomeranian. Michael enjoyed training greyhounds for racing and coon hunting. He also went deer hunting during the bow season. Michael and his brother Wendell had loved music all their lives. Michael played both the guitar and drums, often inviting friends over to have jam sessions. Michael is survived by his mother Earline Louise (Van Atta) Brumley of Bartlesville, one sister Shelly (Brumley) Reid of Bartlesville, along with multiple nieces and nephews, and a host of other family and friends. He was preceded in death by his father Wyman Dale Brumley, one brother Wendell Allen Brumley, his son Christopher Michael Brumley and his grandparents. Family will receive friends on Friday, 6-8 p.m. at Davis Family Funeral Home & Crematory – Walker Brown Chapel, 918-333-7665, 4201 Nowata Rd. Bartlesville, OK 74006. Visitation will also be held on Friday, 10-8 p.m. Memorial services will be held at 2 p.m. Saturday at Eastern Heights Baptist Church with Pastor Jason Van Atta officiating. Services are under the direction of Carter Davis and the Davis Family Funeral Home & Crematory – Walker Brown Chapel. Online condolences and remembrances may be shared at www.DavisFamilyFuneralHome.com.

Michael Dale Brumley, 57, died Friday in Bartlesville, the city where he was born and returned home to. He joins his father and brother on the other side but will be missed by his mother, sister, other family and friends. Michael was born on... View Obituary & Service Information

The family of Michael Dale Brumley created this Life Tributes page to make it easy to share your memories.

Send flowers to the Brumley family.