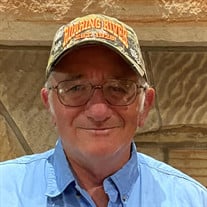 Michael Eugene Lyon, 71, of Dewey, Ok, died Sunday in Cassville, Missouri. Mike was born to Norman Eugene and Maryanne (Niemeier) Lyon on April 3, 1951, in Dixon, Illinois. He graduated Dixon High School Class of 1969, earned his associate degree at Milwaukee School of Engineering, and an MBA from Lake Forrest College in IL. In his early years, Mike enjoyed drag racing, working on his ham radio, and fixing anything he could get his hands on. Mike met the love of his life, Madonna Bonney, at a party in Milwaukee. After graduation, the couple married and had two children, Emily and John. Mike started his career working for Outboard Marine Corporation as a Quality Engineering Manager for a total of 29 years, 10 of those years in Waukegan, IL and the rest in Calhoun, Georgia. While in Calhoun, he was a Boy Scout Leader and was very active at St. Clements Catholic Church. Deciding to make a change, Mike brought his family to Bartlesville, Oklahoma, where he worked at Schlumberger for 15 years. Mike and Madonna celebrated their 50th wedding anniversary recently doing what they loved the most, fishing. In Oklahoma, Mike and Madonna started to camp and fish at Roaring River State Park in Cassville, Missouri. Mike took up fly fishing and learned how to tie his own flies. He also joined a group with other fly-fishing enthusiasts, called “The Green Country Flyfishers Sport Club.” Mike often would go to the public schools and educate kids on the techniques of fly fishing. Mike was a devout Catholic and attended church regularly with his family. He was loved by so many family members and friends. Mike loved joking around with everyone, was honest, trusted, and had a strong work ethic. Most of all, Mike was a wonderful husband to Madonna. Mike is survived by his loving wife, Madonna; his two children, Emily Mary Lyon and John Eric Lyon and his wife Seira; two grandchildren, Yoshito Simba Lyon and Shizuku Zoey Lyon; brother, Rick Lyon and his wife Tina; sister, Judy Bardell; and a host of other family and friends. He is preceded in death by his parents. In lieu of flowers, the family requests donations be sent to: Green Country Flyfishers, P.O. Box 1053, Bartlesville, OK 74005. They are a non-profit, however, donations are not tax deductible. Funeral mass will be held Monday at 1 p.m. at St. John Before the Latin Gate Catholic Church. Services are under the direction of Carter Davis and the Davis Family Funeral Home. Online condolences and remembrances may be shared with Mike's family at www.DavisFamilyFuneralHome.com.

The family of Michael Eugene Lyon created this Life Tributes page to make it easy to share your memories.