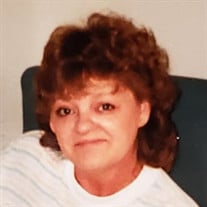 Mildred Junita Eikenbary, 73, Barnsdall longtime resident and a big-hearted volunteer, died Saturday morning at the Barnsdall Nursing Home following a long illness. She loved her family and her passion in life was serving others. Mildred or Junita as she was known was born the daughter of Earnest and Ruth (Barnard) Abshire on October 3, 1945, in Oklahoma City. Her father worked for Schlumberger and the family relocated often. At the age of 13 while living in Drumright, OK, Junita met Doug Eikenbary and quickly fell in love. Just three short years later, they eloped to Bentonville, AR, where they were married May 10, 1961. Doug was stationed at Naval Base San Diego in California (homeport of the US Pacific Fleet) and Junita joined him for his two-year assignment. During this time her parents moved to Enid, so upon returning to Oklahoma, Junita and Doug made their home in Enid for the next 10 years. The family moved to Tulsa for four years before settling in Barnsdall in 1977 where Junita was very active in the community. She had a strong work ethic and cared about her community. Her employment history included jobs as a real estate agency in Enid, a busy restaurant in Tulsa, and as an EMT at the Barnsdall Ambulance. Some of her interests were the Barnsdall Public Library, Red Cross Blood Drive, Food Bank, Methodist Church, Angel Tree, Barnsdall High School, Barnsdall History Museum and many others. Doug went to work for a subcontractor for the U.S. Army Corps of Engineers at Birch Lake and Junita became an active volunteer in the community. Once the kids were grown, she started work at Sitel in Bartlesville as an operator and enjoyed her 10 years with the company from 2000 to 2010. Junita remembered fondly her childhood summer visits to Ringling, OK, to visit with her father’s extended family. Together Doug and Junita enjoyed fishing and bowling. She was very creative and loved to draw and paint. While in Tulsa she volunteered with the American Red Cross, and after moving to Barnsdall she used her talents to write a grant that provided funding for the library. Junita volunteered for 30 years with the Barnsdall Community Ambulance, serving as Director for several years, and also wrote a grant that provided funding for a new ambulance that would serve her neighbors and beloved hometown. She will be dearly missed by all whose lives she touched. Most of all Junita was devoted to her family. She will be remembered as caring, giving and always loving. She would do anything to please her family. She was a talented singer and artists and enjoyed nature and animals. She was quick to smile and laugh and was liked by all who knew her. She fought the illness of dementia for many years and is now free of this disease. Junita is survived by her loving husband of 58 years Doug; two children, Tammy Beerbower and Monte of Bartlesville, and Rob Eikenbary; four grandchildren, Heather, Daniel, David and Levi; and three great grandchildren. She is preceded in death by her parents, brother Jimmie Abshire and sister Doris Beth Abshire. Visitation will be held on Tuesday from 9-8 at the Davis Family Funeral Home – Walker Brown Chapel, 918-333-7665, 4201 Nowata Rd, Bartlesville. Funeral services will be held 2 p.m. on Wednesday, September 18, at the Highland Cemetery in Oilton, OK. Services are under the direction of Carter Davis and the Davis Family Funeral Home – Walker Brown Chapel. Online condolences and remembrances may be shared at www.DavisFamilyFuneralHome.com.

Mildred Junita Eikenbary, 73, Barnsdall longtime resident and a big-hearted volunteer, died Saturday morning at the Barnsdall Nursing Home following a long illness. She loved her family and her passion in life was serving others. Mildred or... View Obituary & Service Information

The family of Mildred Junita Eikenbary created this Life Tributes page to make it easy to share your memories.

Send flowers to the Eikenbary family.