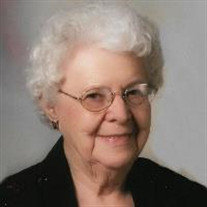 Mona Maxine Veteto, 95, of Bartlesville, died Sunday in Bartlesville. Local arrangements were under the direction of Carter Davis and the Davis Family Funeral Home – Walker Brown Chapel. Mona was born on February 27, 1924 at Gas City, Kansas, to Samuel and Winifred Maxwell Troxel. She graduated from Iola High School in 1942. She married Billie Wilson Veteto on April 27, 1947, in Iola. He died on January 25, 1988. Mona worked for the Union Gas and LP Company in Burlington as a bookkeeper for 35 years. She was a member of the Burlington Christian Church. She had been on the Coffey County Museum Board. She was an avid painter. Mona was also preceded in death by her parents and a brother Eugene Troxel. Mona is survived by her two sons, Mike and his wife Connie of Bartlesville, OK and Craig and his wife Kim of Spring, TX, five grandchildren, Caitlin Veteto, Bartlesville, Jeffery and his wife Emily, Dallas, TX, Jennifer Linneman, and her husband Ricky, Pomona, KS, Mason Veteto, Katy, TX, and Rozlyn Veteto, Spring, TX, one great grandson, Clint Linneman, other relatives and friends. Services will be at 10:30 A.M., Saturday, June 29, 2019, at the Jones Funeral Home, Burlington, KS. Burial will be in the Graceland Cemetery. Contributions to the Alzheimer’s Association may be sent in care of Jones Funeral Home, PO Box 277, Burlington, KS 66839.

The family of Mona Maxine Veteto created this Life Tributes page to make it easy to share your memories.

Send flowers to the Veteto family.