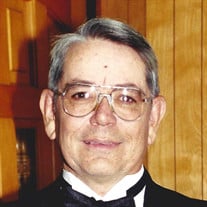 Myrle Lee Cochran, a longtime Bartlesville resident, was 75 when he departed his earthly home on September 14, 2021. He was born in Bartlesville April 1, 1946, the son of Myrle Alford and Shirley Lee Cochran. Along his three siblings, he grew up in the area and attended Bartlesville Public Schools, graduating with the College High (Wildcat) Class of 1965. As a young man, he spent his summers hauling hay and learning the value of hard work at an early age. Myrle’s mind was always very mechanically gifted and he not only worked on small appliances but custom built a 1956 Chevy. It was the same car he had when he later met his bride-to-be Brenda. After graduation, Myrle joined the U.S. Air Force and was stationed stateside at Cannon AFB near Clovis, New Mexico. There, at a Church of the Brethren, Myrle set eyes on Brenda. Soon after, they got married on September 10, 1967, in Clovis. Myrle transferred station to Nellis AFB near Las Vegas, Nevada, where he excelled as an aircraft mechanic and made sergeant. After his honorable discharge in 1969, Myrle attended Eastern New Mexico University where he earned his Associate’s degree and graduated with summa cum laude honors. They moved to Texas before deciding to head home to Bartlesville. Myrle joined Phillips Petroleum Co. in 1976, then worked for Conoco at its Ponca City Refinery, specializing in instrumentation. He first retired in 2008, then went back in 2010 and just kept on working, clocking in some 30 years in the oil & gas industry. Along the way, Myrle and Brenda started a family and raised two beloved children, Nickie and Mitchell. Myrle and Brenda were blessed with 54 years (just over half a century!) of loving marriage before his passing. One constant throughout his life was Myrle liked staying busy – he was always working and when he was not on the job, his hobbies and simple pleasures kept his fingers active and mind nimble. He enjoyed solving sudoku puzzles, helping his neighbors and coworkers, and working on cars and lawn mowers. Myrle and Brenda also liked to travel, taking road trips to see historical sites, antique machinery museums, and state parks with the kids. They looked forward to having family reunions and spoiling their grandkids. Grandpa Myrle often roped in the grands’ to help him fix things covered in grease. Apart from his family, Myrle loved his Lord and Savior Jesus Christ more than anything else in this world. While Myrle is now at peace in his heavenly home, his family and his friends on earth will miss him dearly. Myrle is survived by his wife Brenda of the home; two children, Nickie Mangrum and Edward, and Mitchell Cochran; four grandchildren, Rylan Cochran, Erin Mangrum, Dylan Cochran, and Samuel Mangrum, brother Bill Cochran and sister Mary Beth Lindley, as well as a host of extended family, Christian brothers and sisters, and other friends. He is preceded in death by his parents and sister Martha Cochran. Myrle’s family will receive friends at the Davis Family Funeral Home & Crematory – Walker Brown Chapel, 918-333-7665, 4201 Nowata Rd, Bartlesville, on Friday, September 17, from 6-8 p.m. Visitation will also be held on Friday from 10-8 and Saturday from 9-noon. Services will be held 2 p.m. on Saturday, at the Davis Family Funeral Home & Crematory – Walker Brown Chapel with Pastor Myong Hubbard officiating. Services are under the direction of Carter Davis and the Davis Family Funeral Home & Crematory – Walker Brown Chapel. Online condolences and remembrances may be shared at www.DavisFamilyFuneralHome.com.

Myrle Lee Cochran, a longtime Bartlesville resident, was 75 when he departed his earthly home on September 14, 2021. He was born in Bartlesville April 1, 1946, the son of Myrle Alford and Shirley Lee Cochran. Along his three siblings, he grew... View Obituary & Service Information

The family of Myrle Cochran created this Life Tributes page to make it easy to share your memories.

Myrle Lee Cochran, a longtime Bartlesville resident, was 75 when...

Send flowers to the Cochran family.