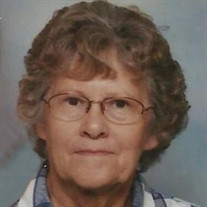 Nancy Marlene Whitehead, 80, of Bartlesville, died Thursday in Bartlesville. “Marlene” as she was known to friends, or “Old Grandma” a term of endearment that her great grandchildren gave her though she tried unsuccessfully to change numerous times, passed unexpectedly Thursday morning. Old Grandma Marlene will be dearly missed by all who knew and loved her. Marlene was born the daughter of Dave Clayborn and Nettie Cornelia (Saunders) Harper on December 13, 1939, in Elk City, Kansas. She attended Elk City Elementary School and later finished her high school education at LaFontaine, Kansas. Later in life she would attend Independence Community College and was very proud of her perfect 4.0 GPA. Marlene grew up on the family farm and enjoyed playing and working with her many siblings. She married her high school sweetheart George Arthur Whitehead on May 14, 1960, in Independence, Kansas. They made their home in Dewey where they raised son Tony and later moved to Independence. After 40 years of loving marriage, George preceded her in death on October 5, 2000. Marlene made her way back to the Washington County area and enjoyed her many grandchildren and great grandchildren. Once Tony was older, Marlene went back to work - first at Emerson Electric and then Cessna, both in Independence, and finally at the Bartlesville Wal-Mart at a job she truly enjoyed. Her department as it was known to the family was “HBA” (Health and Beauty Aids) and the only thing she didn’t like was being pulled from her department to run the cash registers. Together George and Marlene enjoyed working in their garden and she always wanted to be doing or going wherever George did. Other than that, she was a homebody who enjoyed reading, doing for others and was always gullible, falling for her family’s many shenanigans and pranks. Her cookie jar was famous with the grandchildren, it was shaped like a wolf and howled when opened, alerting Grandma to missing cookies. Marlene was also known for the many letters she wrote to family and friends which were always appreciated and arrived just at the right time. She had that special touch that made everything memorable and everyone, family. Marlene is survived by her son Tony Whitehead and Tricia; brother Byron Harper and Darlene; sisters Mary Metzger and Irene Chrisenbery; nine grandchildren, Lacy Upton and Cody, Stephen Whitehead and Kendra, Sierra South and Joshua, Matthew Mack, Jacob Mack and Gabriel Mack; and four great grandchildren, Noah, Madilyn, Hadley Mae and Harrison. She is preceded in death by her parents, husband George, and brothers Donald and Clayborn Harper. No formal services are planned. Arrangements are under the direction of Carter Davis and the Davis Family Funeral Home. Online condolences and remembrances may be shared at www.DavisFamilyFuneralHome.com.

Nancy Marlene Whitehead, 80, of Bartlesville, died Thursday in Bartlesville. &#8220;Marlene&#8221; as she was known to friends, or &#8220;Old Grandma&#8221; a term of endearment that her great grandchildren gave her though she tried unsuccessfully... View Obituary & Service Information

The family of Nancy Marlene Whitehead created this Life Tributes page to make it easy to share your memories.

Send flowers to the Whitehead family.