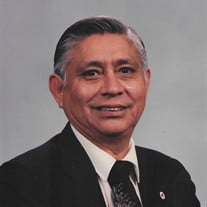 Rev. Pablo Alvarado, faithful minister, teacher, veteran and longtime Bartlesville resident aged 85, died in his sleep in Bartlesville Saturday. He joins his Lord and Savior, and his wife Ann, who preceded him in death just a few days shy of a year ago. With determination and a bit of luck (or divine blessing), Pablo had finally met the love of his life Lenora Ann Allen, most likely while she was taking her lunch break from working at Phillips Petroleum, at the Flat Iron restaurant on Frank Phillips Blvd. At the time, Pablo was a young serviceman who was stationed on Radar Hill – he had first seen her on New Year’s Eve two months earlier and went back many times until he chanced upon her again. He asked her out and instead, Ann – the daughter of a Fire Baptized Holiness preacher - invited Pablo to church the next day. He found in Ann a Godly woman and soul mate who was lovely, kind and had a fabulous sense of humor. On Aug. 3, 1957, Pablo and Ann were united in marriage. They enjoyed 60 years of happy marriage before Ann’s passing last March. Shortly before Pablo was deployed to Japan, Ann and their young daughter Linda, moved to Pharr, TX in the Rio Grande Valley to live with Pablo’s family. Once home, Pablo took a teaching position in Pekin, IL, where a second daughter, Anna Lisa was born. His teaching positions took them to Shidler, OK and to Texas, where both Pablo and Ann started their careers with the Texas Education System. Pablo had a brilliant mind and accomplished much in one lifetime – in addition to a BA in Mathematics and certification in Education, he earned a Masters in Computer Science and one in Mathematics, before changing fields mid-career. Later in life, Pablo received his calling to the ministry – his car was hit by lightning and blew a tire, yet Pablo miraculously survived by God’s grace. He entered seminary at Perkins School of Theology at Southern Methodist University in Dallas, TX and earned a Master of Divinity before going on to minister in at least six churches throughout Texas. Ann was an active partner and pianist in his ministry. Once retired they returned to Bartlesville to be closer to loved ones in 1995. Pablo had a great thirst for knowledge and was always learning volunteering for the church community. Pablo and Ann loved to travel and a real highlight among many trips, was their memorable trip to Europe visiting several countries including Germany and France. Pablo is survived by his two daughters, Linda Carson and Dr. Scott Carson of Laurel, MS and Anna Lisa Alvarado of Bartlesville; four grandchildren, Melissa Ann Carson Pichon and Severin of Huntsville, AL, David Prescott Carson and Rachel Carson of Virginia Beach, VA, Patricia Ann DeGroot and David DeGroot of Houston and Sgt. First Class John Musser III and Kallista Musser of Cypress, TX; 10 great grandchildren; four siblings, Rudolfo Alvarado, Xico Alvarado, Juventino Alvarado, and Diamantina Hayes; and a host of other family and friends. He was preceded in death by his parents Jose and San Juana, wife Ann and four brothers, Jose, Ricardo, Adolfo, and sister, Argentina Gonzalez. Please no flowers. In lieu of them, all memorials being made, are to bless Southeastern Baptist College, 4229 Hwy. 15 North, Laurel, MS 39440. Memorial services will be held 6 p.m. on Friday, March 15, at the La Trinidad United Methodist Church in Pharr, TX. Local arrangements were under the direction of Carter Davis and the Davis Family Funeral Home – Dewey Chapel. Online condolences and remembrances may be shared at www.DavisFamilyFuneralHome.com.

Rev. Pablo Alvarado, faithful minister, teacher, veteran and longtime Bartlesville resident aged 85, died in his sleep in Bartlesville Saturday. He joins his Lord and Savior, and his wife Ann, who preceded him in death just a few days shy of... View Obituary & Service Information

The family of Rev. Pablo Alvarado created this Life Tributes page to make it easy to share your memories.

Send flowers to the Alvarado family.