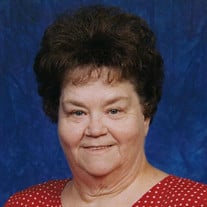 Patricia Joan Benefiel, 82, of Dewey, went to be with her Heavenly Father on May 19, 2021. Patricia, known to all as Joan, was born December 8, 1938 in Bartlesville to Howard Weber and Edith Alma Jane (Lowe) Brown. She was raised with her brother Everett and sister Alma in Bartlesville. She attended Bartlesville Public Schools and graduated from College High in 1957. Before graduating from high school, she married the love of her life, Billie Eugene Benefiel, on July 23, 1954 at the Bartlesville First Assembly of God Church. Joan would later begin working at Phillips 66 as an administrator and secretary. Joan would enjoy many years as a stay-at-home mom, pastor’s wife, and as the pianist for their church. She and Billie were co-pastors at New Hope Assembly of God and helped to organize their food bank and other volunteer programs within the church. She was a devout woman of God and was the human embodiment of unconditional love, as she would try her best to do anything for anyone if she were able to. In her free time, Joan enjoyed spending time with Billie and their sons, Kevin and Alan. They all have fond memories of various family vacations, weekends spent camping and fishing, as well as the many family cookouts that they would have. She was known by many for her habit of couponing and lived by the rule of “if I can’t use my coupon, then I don’t need it.” Joan is survived by her two sons, Kevin Benefiel of Bartlesville and Alan Abel (Ida) of Disney, OK; sister, Alma Nadine Perkins (Roger) of Bartlesville; seven grandchildren Kevin Benefiel, Chris Benefiel, Brad Benefiel, Sheilah Patterson, Kelsey Harjo, Brianna Abel, and Nathan Abel; as well as multiple great-grandchildren, nieces, and nephews. She is preceded in death by her husband, Billie; her parents; a brother, Everett Merle McKinley Brown; and one grandson, Brandon Abel. Joan’s family will receive friends at the Davis Family Funeral Home & Crematory – Walker Brown Chapel, 918-333-7665, 4201 Nowata Rd, Bartlesville, on Saturday, May 22, from 3-5 p.m. Visitation will also be held on Saturday from 12-5 p.m. and Sunday 12-5 p.m. Graveside services will be held 10 a.m. on Monday, May 24, at Memorial Park Cemetery, with Pastor Charles Brown officiating. Interment will follow in the Memorial Park Cemetery. Services are under the direction of Carter Davis and the Davis Family Funeral Home & Crematory – Walker Brown Chapel. Online condolences and remembrances may be shared at www.DavisFamilyFuneralHome.com.

Patricia Joan Benefiel, 82, of Dewey, went to be with her Heavenly Father on May 19, 2021. Patricia, known to all as Joan, was born December 8, 1938 in Bartlesville to Howard Weber and Edith Alma Jane (Lowe) Brown. She was raised with her brother... View Obituary & Service Information

The family of Patricia Joan Benefiel created this Life Tributes page to make it easy to share your memories.

Patricia Joan Benefiel, 82, of Dewey, went to be with her Heavenly...

Send flowers to the Benefiel family.