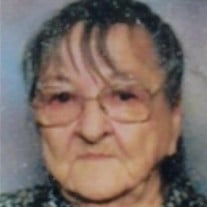 Patsy Jean Graves, age 86, passed from this earth to her heavenly home on Saturday, Nov. 16, 2019, at St. John Hospital, Tulsa, OK. On March 10, 1933 Patsy Jean Loe was born in a little house in Coffeyville, Kansas. Patsy was the first child and first daughter of Earl and Audrey Loe. She spent her early years in the Coffeyville area. When WWII started, the family moved to San Diego, California and lived there for a few years while Patsy's dad worked at the shipyards helping construct ships in the war effort. After the war, they came back to the family farm in South Coffeyville, Oklahoma. Pat lived through the depression, helping her dad take care of the farm. Pat’s dad moved the family again to camp housing provided for the employees by the company he started working for. Pat's dad later changed jobs going to work for Phillip's. Pat, Patricia and Everett moved with her parents to Bartlesville, OK. While in Bartlesville, Pat met Lewis Graves. Lewis was working as a mechanic for the Mullendore Ranch. They dated and later married in August, 1957. Lewis and Pat moved to Farmington, New Mexico with their two children, Everett and Patricia. They lived there for a few years. Lewis, Pat and their children later located to Amarillo, Texas. There in Amarillo, Lewis opened his own mechanic repair shop. Pat worked with Lewis building their business into the best known repair shop in Amarillo. Lewis became involved in racing cars at the local track in Amarillo. Pat wasn't happy about the dangers of racing, but supported Lewis in it. From stock to modified to super modifieds, she and their children were always there in the bleachers cheering him on. Pat and Lewis welcomed their daughter, Christi Ann into the world on Sept. 7, 1960. By this time they were living in the east ridge area of Amarillo. Pat and Lewis were avid bowlers. They were members of a league in Amarillo. They were both very good at it, helping their league win many tournaments. Later the family moved to Brown Drive. Pat had a third daughter Christial born. Pat’s, daughter Christi met, dated and married Kevin Mitchell. Christi and Kevin later welcomed their daughter Wendy into the world and Pat became a very proud grandma. Pat became a great-grandma after Wendy had three daughters, Raven, Shelby, Lilliana. Pat continued to live in Amarillo until she, Everett, Patricia and Christial relocated to Dewey, OK, upon her father Earl urging them to move there. Pat became well known in the community, as Pat, Patsy and as Peewee Graves’ mom. Pat was known to give a helping hand to people in need. Many times she would provide items needed, be it a blanket, household items, food, clothing. Pat was a strong woman, she faced things head on. She was a survivor. She was not one to waiver on her thoughts, beliefs and opinions. Pat loved the Lord in her own special way. She always said that she wasn't perfect and hoped God would look past that. With Pat's passing, she has joined her son Everett in eternal peace and joy in heaven. Her passing was so peaceful. And as she took her last breath, the angels were with her to carry her home. Preceding Patsy in death, her mother Audrey, her youngest sister Judy, her step mother Mary, her dad Earl, and her son Everett. Those surviving are daughter Patricia of the home, daughter Christi Mitchel and husband Kevin Mitchell of Amarillo Texas, daughter Christial of the home; granddaughter, Wendy Salas and Ricky of Amarillo, Texas; great-granddaughters, Raven, Shelby, Lilliana, all of Amarillo, Texas; her sister, Peggy Booth and husband Bill Booth of Bartlesville, also many nieces, nephews. Visitation will be held from 10-8 on Thursday, November 21, at the Davis Family Funeral Home - Dewey Chapel. Funeral services will be held 2 p.m. on Friday, November 22, at the Davis Family Funeral Home – Dewey Chapel. Services are under the direction of Carter Davis and the Davis Family Funeral Home – Dewey Chapel. Online condolences and remembrances may be shared at www.DavisFamilyFuneralHome.com.

The family of Patsy Jean Graves created this Life Tributes page to make it easy to share your memories.

Patsy Jean Graves, age 86, passed from this earth to her heavenly...

Send flowers to the Graves family.