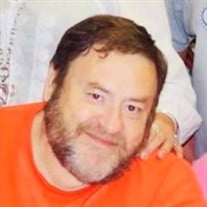 Paul Ray Jackson, 70, lifelong resident and son of Bartlesville, died Tuesday in his hometown. He was a Godly man who lived large, loved hard, and lit up whenever he saw friends and family. Paul was born the son of Robert Ray and Paula Lee (Rollins) Jackson on Dec. 1, 1950, in Bartlesville. He was raised in Ramona and Copan, and he played all of the school sports. Paul was the biggest guy in school and that earned him the nickname Bun for Paul Bunyan, though the girls called him Bunny. He was voted most likely to succeed his senior year of 1969 – the same year Paul missed out on kissing the Basketball homecoming queen due to a coin toss that didn’t go his way. Of course, a funny photo was captured, showing Paul’s disappointment while his co-king kissed his queen. Paul went on to attend Northeastern Oklahoma A&M (NEO) in Miami, OK, where he enjoyed learning and making new friends wherever he went. It was at First Baptist Church that Paul met the love of his life Gayle Bradley during a singles party. It only took seven years of dating for Paul to finally pop the question and they were united in marriage on May 22, 1982. Paul and Gayle made their home in Bartlesville and raised two sons Matthew and Peter. Paul worked at Phillips, Saber, and DSR for many years before retiring, and along the way he made many dear friends and cherished each and every one of them. Gayle preceded Paul in death in 2006 after 24 years of loving marriage. For anyone who knew Paul, you will realize there is no good way to sum up his life in such a short story but let’s hit the highlights: Paul was an amazing person - he loved everyone and was quick to call you by name and invite you over for a conversation. He was kind and fun-loving, with a smile that filled the room when he walked through the door. He was a prayer warrior and loved the Lord, a dedicated witness for Christ, who attended prayer meetings regularly and shone his joyful light for the whole world to see. Oftentimes you would see Paul out and about in the community, eating at his favorite restaurants - Mazzios, Eggberts, or Dinks – usually with a big grin on his face and many friends by his side. Paul was a social butterfly and ardent community supporter - he always made sure to attend every parade, 4th of July firework celebration, or local sporting event he could, whether it was Oklahoma Wesleyan basketball or high school football games. It would be an understatement to say he was a sports fanatic because he was also a diehard OU Football fan (Boomer Sooner!). Most of all Paul loved his family: he called his siblings daily, enjoyed family get-togethers, and made sure his sons knew they were loved. His heart was so big he even adopted sons like Paul Nelson who was his partner in crime and you usually saw one sidekick with the other. Paul was a character: he loved to joke and tell stories. Anytime he ordered at Chick-fil-A, everyone got a kick when they would call out the order for “Rambo” and Paul would respond, “That’s me.” The gentle giant of a man with a gentle sense of humor and a giant heart to match will be dearly missed. Paul is survived by his sons, Matthew Jackson and Brigitte, and Peter Jackson; stepdad Carl “Sarge” Nelson; stepmom Jessie Jackson; brother Dalen Lee Jackson and Sherry; five sisters Darla Sue Bohannan and Dennis, Carolyn Osborne and Tony, Connie Stokes, Paula Mitchell and Marvin, and Judy Tucker and Dewayne; bonus son Paul Nelson; and a host of cousins, nephews, nieces, other family, friends and church family. He is preceded in death by his wife, parents, and brothers Rodney and Gary Allen. Paul’s family will receive friends at the Davis Family Funeral Home – Dewey Chapel, 918-534-3030, 113 S. Osage (Hwy. 75), Dewey, on Sunday, from 3-5 p.m. Visitation will also be held on Monday from 10-12. Funeral services will be held 2 p.m. on Monday, Sept. 13, at Victory Church Bartlesville, 4601 Nowata Rd., with Rev. Tim Kutz officiating. Interment will follow in the Memorial Park Cemetery. Services are under the direction of Carter Davis and the Davis Family Funeral Home – Dewey Chapel. Online condolences and remembrances may be shared at www.DavisFamilyFuneralHome.com.

Paul Ray Jackson, 70, lifelong resident and son of Bartlesville, died Tuesday in his hometown. He was a Godly man who lived large, loved hard, and lit up whenever he saw friends and family. Paul was born the son of Robert Ray and Paula Lee... View Obituary & Service Information

The family of Paul Ray Jackson created this Life Tributes page to make it easy to share your memories.

Send flowers to the Jackson family.