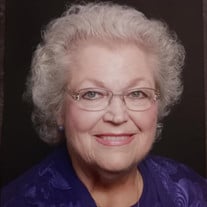 Peggy Joyce (Roberts) Cauthen, 83, of Bartlesville, OK, joined the heavenly choir on Dec. 2, 2021, shedding all confusion, pain, illness and grief and gaining perfect peace, health, and soundness of mind. Family was at her side when she was reunited with her Lord and Savior Jesus Christ and her loved ones already in their heavenly home. Peggy was born on April 11, 1938, in the family farmhouse in Yeager, OK, to Willie Thomas Roberts and Helen Lucille Roberts (Conover). Other family members residing with them at the time included her Grandma Mary (Eddie) Roberts, Aunt Pauline Roberts (Pruitt), and Uncle Arthur Roberts. She said it would get so cold in the house that ice would form after you wiped the table. Snow blew in through the cracks in the walls. As a child at an early age, she discovered her singing talent when her father put her up on a stage at church to sing in front of a crowd. He held her feet to keep her from running away. In college, she was a youth pastor and graduated with a degree in elementary education and music from Eastern State University in Ada, OK. During her college years she sang at various events in Oklahoma with the encouragement and support of her beloved music professor. In 1962, she married Don Cauthen of Edmond, OK, at the First Baptist Church in Holdenville. They went on to have two sons, Jeffrey Don Cauthen and Christopher Thomas Cauthen. She fiercely loved her family. Weathering her husband's mental illness, she bravely kept the family together through incredibly tough times that would have broken most. In their later years she moved her mother and brother to Bartlesville to take care of them. She taught first grade classes in public schools in OKC and Copan for nearly 40 years. Teaching was her calling. She loved her students and was known to provide food, shoes, and clothing for them. She organized and directed an inner-city fifth grade girls choir and tailored their matching dresses. The choir sang all over OKC and for the governor. She prayed daily with her students and was a brave, consistent, spiritual example. Her former students remember her warm, loving hugs. Peggy loved teaching Sunday School and extensive Bible studies for adults, as well as singing specials and in the choir. She co-started and directed the puppet ministry at Tuxedo Assembly of God and would take the puppet team, Kool-Aid, and cookies to minister at local parks on Saturdays. After the passing of her husband, Don, in 2006, she led a grief share group at First Assembly of God in Bartlesville. Peggy’s hobbies included quilting, sewing, tatting, crocheting, ceramics, making teddy bears, country craft painting, collecting Raggedy Ann and Andy and other dolls, as well. Her grandchildren, Christian, Kiren and Carissa, were recipients of numerous lovingly made costumes, blankets, and dolls. Other interests included reading and studying books about prophecy and the Bible. She wrote and published Senior Cents. To say she enjoyed her coordinated purses and costume jewelry would be an understatement. In 2010 she married Duane Mueller. The two enjoyed traveling to Colorado and Branson. Basketball games at OWU were also a favorite as were many family events and dinners. Many thanks to the Muellers for making her feel so welcome. Alzheimer's Disease had a negative impact on her personality the last few years. If she hurt or offended you, she would now like to offer her deepest regrets and apologies. The disease never stole her memory of her loved ones and friends. Many thanks to all the members of her medical team who helped us care for her since 2019. She is survived by her sons, Jeff Cauthen and wife Sally, Chris Cauthen and wife Kimberley, all of Bartlesville, OK; her grandchildren, Christian Cauthen and wife Anna, of Tyler, TX, and Kiren and Carissa Cauthen, of Bartlesville, OK; as well as several nieces and nephews, in-laws, and countless friends. In addition to her parents, she was preceded in death by her first husband, Don Cauthen; and her brother, Bob Roberts. Peggy’s family will receive friends at the Davis Family Funeral Home & Crematory – Walker Brown Chapel, 918-333-7665, 4201 Nowata Rd, Bartlesville, on Friday, Dec. 10, 2021, from 6-8 p.m. Visitation will also be held on Friday from 10-8. THE FAMILY REQUESTS THAT MASKS BE WORN AT THE VISITATION & SERVICE. Memorial services will be held at 10 a.m. Saturday, Dec. 11, 2021, at the Davis Family Funeral Home & Crematory – Walker Brown Chapel. Services are under the direction of Carter Davis and the Davis Family Funeral Home & Crematory – Walker Brown Chapel. Online condolences and remembrances may be shared at www.DavisFamilyFuneralHome.com.

Peggy Joyce (Roberts) Cauthen, 83, of Bartlesville, OK, joined the heavenly choir on Dec. 2, 2021, shedding all confusion, pain, illness and grief and gaining perfect peace, health, and soundness of mind. Family was at her side when she was... View Obituary & Service Information

The family of Peggy Joyce Cauthen created this Life Tributes page to make it easy to share your memories.

Send flowers to the Cauthen family.