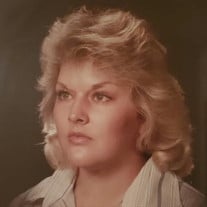 Peggy “Taylor” Louise Sherman, 65, of Dewey, died Wednesday in Bartlesville following a lengthy illness. Taylor was born April 13, 1955 to Ernest and Thelma (Townley) White in Pt. Hueneme, Calif. She grew up and attended school in California, earning her Associate of Arts degree in 1993 at Allan Hancock College in Santa Maria, Calif. From 1973-1989, she was married to George W. Sherman, Lt. Col. USAF Ret. Taylor moved to Dewey in 1995, where she resided until her passing. She was employed in the Walmart Accounting office from 1998-2016. Taylor wants to be remembered as having loved Jesus. In addition, she was a fan of Prince Rogers Nelson and his charity Love 4 One Another. Survivors include her son, Michael A. Sherman and his wife, Angela J., of Bartlesville; a sister, Gala J. Blom and her husband, Steve, of Colorado; her grandchildren, Kayla Paige Sherman, Kiera Brynn Sherman and Kaitlyn Rhane Sherman. In addition to her parents, Taylor was preceded in death by her sister, Vickie D. Irwin; and her brother, Michael D. White, both of Bartlesville. No services are planned. Arrangements are under the direction of Carter Davis and staff at Davis Family Funeral Home – Dewey Chapel. Online condolences can be left at www.davisfamilyfuneralhome.com.

The family of Peggy Louise Sherman created this Life Tributes page to make it easy to share your memories.

Send flowers to the Sherman family.