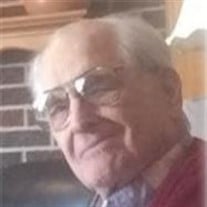 Perry “Dan” Daniel Cargill, 88, longtime Dewey resident, passed away on Saturday in Tulsa. Dan was born the son of Orgle Charlie and Myrtle Goldie (Winkelman) Cargill on January 26, 1931, in Shamrock, OK. He was raised in the country with his four siblings. Together with his brothers Dan hunted and trapped for furs. His early education was at a little country school called Oak Grove and Dan went on to graduate from Cushing High School in 1949. There in Cushing, he met his high school sweetheart Joyce, who he saw at Vee Drug Store every once in a while. Shortly after enlisting and being stationed at Scott Air Force Base near St. Louis, Dan would go on to marry Joyce in the winter of 1951 in Bellville, IL, and they would spend 68 wonderful years of life together. After serving in Germany, the couple came back home and made a life in Oklahoma, first in Cushing, then Pawhuska, Stillwater, and finally Dewey. Once home, Dan returned to his job at Southwestern Bell where he worked his way up to Chief Switchman and being the chief, he gave Joyce a very special phone number. If Dan wasn’t working, he was taking his lovely wife out square dancing, going on road trips together, and camping out with the kids when they were young. Together Dan and Joyce have four children, Leslie, Bryan, Lori, and Marissa, who were the apples of their eyes. Dan spent his free time reading biblical scriptures, Mark Twain, Will Rogers and studying history. He loved his grandkids so much - they would sit on his lap and he happily read to them. In his later years he was an avid bird watcher and even used his skill in woodworking to start building fancy birdhouses. Dan and Joyce were members of Good Shepherd Presbyterian Church for many years. They also sponsored a Vietnamese refugee family after the Vietnam War, taught them basic life skills and to drive, and are still in contact with these longtime friends who still reside in SW Arkansas. Dan will always be remembered as a great husband, father, grandfather, and a true friend. Dan is survived by his loving wife, Freda Joyce Cargill of the home; sons Leslie Daniel Cargill and Lee Ann, and Bryan Cargill; daughters Lori Cargill, Marissa Joy Newsome and David; brother David Cargill and Susie; sister MaryBelle Casey and Don; seven grandchildren Miranda Dawn, Jessica Lyn, Steven and wife Beverly, Kelby Foreman, Shelby Foreman, Dagan Daniel Newsome, and Tristan Campbell Newsome; and two great grandchildren Caden and Casen. Dan was preceded in death by his parents and two brothers John Albert Cargill and Lloyd Randall Cargill. Visitation will be held Tuesday 11-8 p.m. and the family will be receiving friends 6-8 pm at Davis Family Funeral Home - Dewey Chapel, 918-534-3030, 113 S Osage (Hwy 75), Dewey. Graveside services will be held 11 a.m. Wednesday, at Dewey Cemetery with Rev. Janis Lussmyer officiating. Services are under the direction of Carter Davis and the Davis Family Funeral Home – Dewey Chapel. Online condolences and remembrances may be shared at www.DavisFamilyFuneralHome.com.

Perry &#8220;Dan&#8221; Daniel Cargill, 88, longtime Dewey resident, passed away on Saturday in Tulsa. Dan was born the son of Orgle Charlie and Myrtle Goldie (Winkelman) Cargill on January 26, 1931, in Shamrock, OK. He was raised in the country... View Obituary & Service Information

The family of Perry "Dan" Daniel Cargill created this Life Tributes page to make it easy to share your memories.

Send flowers to the Cargill family.