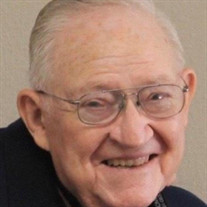 Pete Tyler Wedelin, 92, of Copan, left this earth on December 1, 2021. Pete was born the son of George Henry and Bess (Tyler) Wedelin on October 27, 1929, in Climax, KS. He graduated from high school in Stafford, KS, in 1947. Pete loved playing tennis and basketball during his school days. In the 1950’s, Pete was a First Sargent in the Kansas National Guard. He was part of a seven-man team that rescue nearly 300 passengers stuck on a train buried in a blizzard by Mead, KS. Most of Pete’s youth was in Greenwood County, KS, learning hard work and farming from his grandfather on the family homestead. Later in life Pete bought land East of Independence, KS where he raised Quarter Horses with his three children instilling the same hard work ethic in them. He worked for the Atlas/Lehigh/Heidelberg cement plant in Independence for more than 20 years where he served as President of the local union. On June 30, 1979, Pete married his forever love, Merie, at Grace Memorial United Methodist Church. They made their home in Independence before moving to Copan, OK. In retirement, they opened “Pete’s Shop” where they restored and sold furniture. Pete and Merie were known for their friendliness and willingness to help people in need. After 42 years of loving marriage, Merie preceded him in death on March 9, 2021. Pete was a competitive trap shooter and was a lifetime member of the Independence Gun Club. He also served as a special deputy with the Montgomery County Sheriff Department. In Copan, he spent most of his time at the lake fishing and walking his dog, Lucky. Pete will be truly missed. He is survived by his children, Pete E. Wedelin, and Kelly Bradley and husband Sam; grandson Tyler Bradley; son-in-law Jim Melton; stepdaughter Magel Taylor and husband Doug; stepson Kenneth Vineyard and wife Jan; and numerous step-grandchildren and great-grandchildren. He is preceded in death by his daughter Sharon Melton; sister Nancy DeBruler; nephew Private First Class James DeBruler; and stepdaughter Kathy Bertrand. A Celebration of Life will be held 2 p.m. on Monday, December 6, at the Davis Family Funeral Home - Dewey Chapel. Services are under the direction of Carter Davis and the Davis Family Funeral Home – Dewey Chapel. Online condolences and remembrances may be shared at www.DavisFamilyFuneralHome.com.

Pete Tyler Wedelin, 92, of Copan, left this earth on December 1, 2021. Pete was born the son of George Henry and Bess (Tyler) Wedelin on October 27, 1929, in Climax, KS. He graduated from high school in Stafford, KS, in 1947. Pete loved playing... View Obituary & Service Information

The family of Pete Tyler Wedelin created this Life Tributes page to make it easy to share your memories.

Pete Tyler Wedelin, 92, of Copan, left this earth on December...

Send flowers to the Wedelin family.