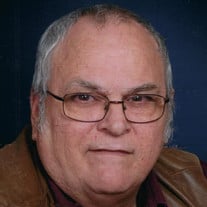 Peter “Paul” Barbee, 70, formerly of Dewey, died Friday in Chanute, KS. Paul was born the ninth child of 16 to James Thomas and Evelyn Mary (Freymuth) Barbee on March 24, 1949 in Tulsa, OK. He was raised on the family dairy farm in Chelsea. During his teen years the family moved to Nowata where Paul completed his formal education, graduating from Nowata High School in 1968. During this time, Paul met Nedra Lumm and they quickly became high school sweethearts, uniting in marriage on July 1, 1968, in Nowata. Paul entered the U.S. Army and was stationed at Fort Sill in Lawton, OK, where Thomas was born, then at West Point where T.J. and Pete were born. Once honorably discharged the family made their home in Dewey, where Mary was born to round out their family. Paul worked for Earl Ice for several years in heat and air, a job he enjoyed until hiring on with Phillips Petroleum. There, he worked his way up to a Chemist Assistant at the Research Center before retiring in 2006 after 20 years of service. Paul was active in his children’s many activities, from cub scout to Webelo to assistant boy scout leader. Paul made it possible for many boys to attend Boy Scout Summer Camp at Camp Cherokee yearly by volunteering and attending camp as an adult leader. Paul and Nedra did everything together and came as a pair. They enjoyed camping, traveling and taking trips to Branson. After 39 years of loving marriage Nedra preceded him in death. Paul loved his grandchildren and always had a snack for them. Throughout the year he collected his spare change and divided it up as a special gift to them – it was his way of thinking about them every day. He was born into the Catholic faith and loved the Lord. Most of all he was a devoted husband and father who loved his family dearly. Paul is survived by his four children, Thomas Barbee, T.J. Barbee and Jennifer, Pete Barbee, and Mary Bates and Scott; two brothers, Donald and Christopher, and four sisters, Loretta Dayer, Jane Barbee, Marie Lewis and Dorothy Wood, 12 grandchildren, Jazmine, Hannah, Shay, Sarah, Tayen, A.J., Payten, Taylor, Abby, Trinity, Malakai, and Josiah; and numerous nieces and nephews. He is preceded in death by his parents, wife, seven brothers James, Lawrence, Daniel, Thomas, David, Clarence, two sisters Lucy Ann and Clare Ponder, and granddaughter Shelby Barbee. Paul’s family will receive friends at the Davis Family Funeral Home – Dewey Chapel, 918-534-3030, 113 S. Osage (Hwy. 75), Dewey, on Tuesday, from 6-7 p.m. A rosary will follow. Visitation will also be held Tuesday from 11am to 6pm. Funeral mass will be held Wednesday at 10am at Our Lady of Guadalupe in Dewey. Services are under the direction of Carter Davis and Davis Family Funeral Home. Online condolences and remembrances may be shared with at www.DavisFamilyFuneralHome.com.

The family of Peter "Paul" Barbee created this Life Tributes page to make it easy to share your memories.

Send flowers to the Barbee family.