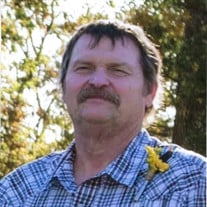 Philip Earl Foster, 64, of Dewey, died Wednesday in Bartlesville. Philip was born the son of Carl Andrew and Betty Jean (Calvin) Foster on January 6, 1957, in Winfield, KS. He was raised in Udall, KS, on the family farm and graduated from Udall High School in 1976. Phil met Denise Cummins through mutual friends. Many of their dates consisted of hanging out with friends, watching movies or going bowling. After their wedding on January 5, 1979, they made their first home on the Mullendore Ranch where Phil was a farm hand. They later moved to Dewey where they raised their two children Carrie and Lucas. Phil enjoyed a long and happy career of 40 years with Oklahoma Natural Gas. He enjoyed his co-workers and was especially proud to have his son join him on the job. Phil’s passions in life centered around Denise and his children. Together with Denise, they had a little hobby farm which centered on her passion for all miniature animals. Over the years, the Fosters raised miniature chickens, ducks, cows, horses and donkeys, just to name a few. They also raised animal-loving kids. A couple of his many hobbies was building lamps and clocks out of old gas meters and watching monster trucks. he also helped Denise with gardening and planting brightly colored flowers and even landscaping water features and such for their lucky farm animals. Whatever Denise wanted; Philip was happy to do. Phil was also eager to participate with the kids’ many activities including 4-H and the saddle club. Over the years, Phil helped build many, many chicken coops and was instrumental in the children’s Barnyard Renovation at the Washington County fairgrounds. Carrie and Lucas enjoyed spending time with dad, tinkering on projects and eating sunflower seeds. Phil had a big heart, and he was always ready to help his neighbors and friends. He was dearly loved and will be dearly missed. Philip is survived by his loving wife Denise of 42 years; two children, Carrie Rae Ratka and Pete, and Lucas Andrew Foster and Macey; brother David Foster; sister Judi Sutton and Boyd; and a host of other family and friends. He is preceded in death by his parents. Visitation will be held on Thursday from 10-8 and Friday 9-12 at the Davis Family Funeral Home - Dewey Chapel. Graveside services will be held 2 p.m. on Friday, at the Dewey Cemetery. Services are under the direction of Carter Davis and the Davis Family Funeral Home – Dewey Chapel. Online condolences and remembrances may be shared at www.DavisFamilyFuneralHome.com.

Philip Earl Foster, 64, of Dewey, died Wednesday in Bartlesville. Philip was born the son of Carl Andrew and Betty Jean (Calvin) Foster on January 6, 1957, in Winfield, KS. He was raised in Udall, KS, on the family farm and graduated from Udall... View Obituary & Service Information

The family of Philip Earl Foster created this Life Tributes page to make it easy to share your memories.

Send flowers to the Foster family.