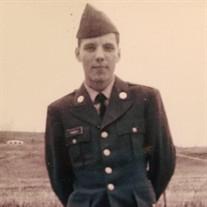 On September 10, 2020: Philip Neal Franks passed away in Bartlesville. At 65 years of age, he was one of the longest-serving plumbers here in Bartlesville with over 40 years under his belt. Phil was born here in Bartlesville, Oklahoma, on November 18, 1954, to Stanley and Roseanna (King) Franks. He grew up in the area, attending Bartlesville Public Schools. Phil graduated from College High School in 1971, and in November of the same year, he enlisted in the U.S. Army. He was one of the youngest men that enlisted from the Bartlesville area. After actively serving in the Army, he underwent on-the-job training as a plumber. Most of his 40 years plumbing was spent working for MGB Plumbing - Heating and Air Conditioning. Phil loved fishing at Hudson Lake, cookouts with his big smoker and charcoal grill, his back yard, and tinkering with small engines. He even built his beloved smoker himself. Nearly every weekend, Phil would fire up the smoker and have cookouts for friends, family, and neighbors to come by. If they were extra lucky, they would feast on Phil’s favorites to cook which were pork ribs, hot links and pork tenderloin. Phil’s appetite for life was matched by his kind heart and he would help anyone if he could. Even now, he is helping 30 people with his organ donation. Phil is survived by his longtime friend Cheryl Alcayde of Bartlesville; his son, Christipher Franks of Grove, OK.; his sister and brother-in-law, Laginia and David Meyer of Clive, IA.; his brother and sister-in-law, Dennis and Amy Franks of Chanute, KS; and brother and sister-in-law, Gordon and Diane Franks of Bartlesville; brother-in-law, Arnold 'Snoop' Kitchen; sister-in-law, Judy Franks; and uncle, James Franks. He is preceded by his parents Stanley and Roseanna Franks, uncle Billy Franks, brother John Franks, sister Sharon Kitchens, and his favorite aunts, Ruth Franks and Ruth Smith. An invitation is extended to those who knew Phil to a Memorial Block Party at his home on Friday, September 18, beginning at 3 p.m. Memorial services will be held 1 p.m. on Saturday, at the Oglesby Cemetery, with Roger Sheppard officiating. Services are under the direction of Carter Davis and the Davis Family Funeral Home and Crematory – Walker Brown Chapel. Online condolences and remembrances may be shared at www.DavisFamilyFuneralHome.com.

The family of Philip Neal Franks created this Life Tributes page to make it easy to share your memories.

Send flowers to the Franks family.