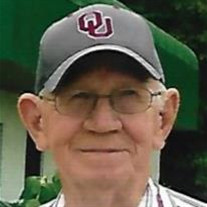 Phillip Neal Munkirs, 82, a wonderful man of God, devoted family man and great friend passed from this life surrounded by love on February 13th into the loving arms of His Heavenly Father and also into the arms of his wife of over 60 years just in time for Valentine's Day. Phil was born December 18, 1936 in Wichita, KS to Frank & Myrtle (Plough) Munkirs. HIs family later moved to Nowata, OK. While in the Navy he was stationed in Kodiak, Alaska, San Diego, CA, & Corpus Christi, TX. He met the love of his life Joan Ruth (Allen) from Dewey, OK and they wed on March 15th, 1957. They made their home in Bartlesville, OK. and he worked at Reda Pump for over 32 years as General Maintenance Superintendent. He made many long lasting friendships there. If asked what he loved most in this world, it would be God & family. He loved working with wood, dancing, protecting animals, gardening and filling his yard with flowers. He shaped his hedge into a giant caterpillar to bring happiness to all that passed his house. He loved to teach, he was a Sunday school teacher at Eastern Heights Baptist Church for many years. He found great joy in his 3 grandkids and 5 great grandkids. He was actively involved in all their lives. His girls called him King Corn because of all his corny jokes, and where ever he went you knew the fun factor would increase. He loved Eggberts, he ate there every day - they knew him by name. Phil is survived by his daughters, Barbara Munkirs, Donna Owens, Debbie Watson, his 3 grandchildren, Ben Watson & Natalie, Kaycee (Watson) & Cass Head and McQuaid Watson & Angela. HIs five great grandchildren: Cade, Devon, Ellie, Grayson & Josiah. His sister Willa (Munkirs) Hall & his brother Paul & Marcia Munkirs & along with several nieces and nephews, and a multitude of family and friends. Phillip’s family will receive friends at the Davis Family Funeral Home – Walker Brown Chapel, 918-333-7665, 4201 Nowata Rd, Bartlesville, on Sunday, February 17, from 3-5 p.m. Visitation will also be held from 9 a.m. to noon on Monday at the Walker Brown Chapel. Funeral services will be held at 2 p.m. Monday, February 18 at Eastern Heights Baptist Church with Pastor Michael Vallandingham officiating. Interment will follow in Memorial Park Cemetery. Services are under the direction of Carter Davis and the Davis Family Funeral Home – Walker Brown Chapel. Online condolences and remembrances may be shared at www.DavisFamilyFuneralHome.com.

Phillip Neal Munkirs, 82, a wonderful man of God, devoted family man and great friend passed from this life surrounded by love on February 13th into the loving arms of His Heavenly Father and also into the arms of his wife of over 60 years just... View Obituary & Service Information

The family of Phillip Neal Munkirs created this Life Tributes page to make it easy to share your memories.

Send flowers to the Munkirs family.