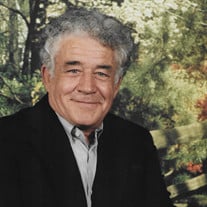 Raymond Bartola Magana, U.S. Army veteran and lifelong Washington County resident, died Saturday in Bartlesville. Raymond was born the son of Frank Magana Sr. and Mary Agnes (Kruczynski) Magana on September 27, 1931, in Dewey. He was raised locally and graduated from Dewey High School with the Class of ’51. He enjoyed sports and excelled at both football and boxing, winning the state Golden Glove Championship his senior year. He served in the U.S. Army during the Korean Conflict. After suffering an injury during training, he was honorably discharged and returned home. Raymond started his own business, Magana Plumbing. He later joined his brother Cecil in the oil business, and they were partners at Magana Oil for many years. He met and married Symelda Dee Redmon and they made their home in Bartlesville and had one son Brad. Preceding Raymond in death was Symelda on Dec. 26, 2012, and then his son, almost five years ago, on May 18, 2014. Raymond was a hard worker and generous provider for his family. He stayed busy checking his oil leases and running around in his truck. When he wasn’t working, he enjoyed playing golf, shooting pool and playing dominos. He loved the Lord and encouraged others to attend church. He had a special relationship with his grandson Josh and they drove around together, checking on leases and picking up pecans. Raymond is survived by his daughter-in-law Sonya Magana, grandson Josh Magana and his fiancé Samantha Toothman, two brothers Carl Magana, and Cecil Magana and his wife Helga, all of Bartlesville; as well as a host of other family and friends. He was preceded in death by his parents, wife Symelda, son Brad, and brother Frank Magana. Raymond’s family will receive friends at the Davis Family Funeral Home – Dewey Chapel, 918-534-3030, 113 S. Osage (Hwy. 75), Dewey, on Tuesday, February 19, from 6-8 p.m. In lieu of flowers, memorials may be made to The Journey Home, 900 NE Washington Blvd., Bartlesville, OK 74006. Thanks also go to the staff of Comforting Hands Hospice and to special friend Mike Geiger. Funeral services will be held 3 p.m. on Wednesday, February 20, at the Davis Family Funeral Home – Dewey Chapel with Chaplain Jsue Wagoner officiating. Services are under the direction and care of Carter Davis and the Davis Family Funeral Home – Dewey Chapel. Online condolences and remembrances may be shared at www.DavisFamilyFuneralHome.com.

The family of Raymond Bartola Magana created this Life Tributes page to make it easy to share your memories.

Send flowers to the Magana family.