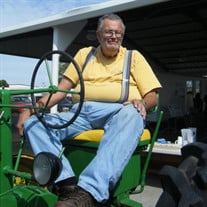 Richard “Dick” Wayne Anderson, 78, of Bartlesville, died Wednesday in Bartlesville. Dick, as he was known, was born the son of Roland Benjamin and Lucille Winifred (Schafer) Anderson on September 18, 1941, in Trimont, Minnesota. He grew up on the family farm in Sherburn, MN, growing corn and soybeans. This is where he found his enduring passion for farm life and livestock. Dick was active in FFA, 4-H and band while attending Sherburn High School, graduating with the Class of 1960. Dick was living in St. Paul when his pastor paired him up with a lovely young lady to go and buy some ice. This simple task led to a 52 year long love affair with Joyce Elaine Westmorland. They united in marriage on September 22, 1961, and made their home in Stillwater, MN, where they raised six children. Dick worked for 35 plus years as a shipping clerk in the steel manufacturing industry before retiring from working for others in 2004. They moved to El Paso, WI, for a short while before moving to a 20-acre farm in Ramona, OK, in 2005 to be near their beloved grandchildren. Joyce preceded him in death on November 6, 2013, after more than a half century together. Dick loved animals and when his kids were young they raised rabbits for show and meat. For 35 years he took a week off of work every year to take on the role as Rabbit Superintendent at the Washington county fair in Minnesota. At their farm in Ramona, OK, Dick raised sheep, ponies, mini horses and llamas which the grandkids loved to visit and help out with. Together Dick and Joyce loved to go camping, singing southern gospel songs, and taking long rides in the car, sometimes just wondering where the road would lead them. Dick was a member of the antique tractor club and enjoyed using his Heflinger horses to pull his wagon when they lived in Wisconsin. Dick’s greatest passion in life was his family and he relished spoiling Joyce and the grandkids with love and whatever they needed. Most of all he loved the Lord and now is reunited with Joyce in Heaven. Dick is survived by his six children, Mark Anderson of Dewey, John Anderson of Dewey, Darrellyn Dawson and husband Thomas of Bartlesville, James Anderson and wife May of Ramona, Elizabeth Badjie of Bartlesville, and Sara Workman and Jess of Ramona; one brother Darrell Anderson and wife Merlene of West Lafayette, IN; seven grandchildren Kristopher Dawson, Melody Rector, Jonathan Gilbert, Matthew Spornitz, Joua Badjie, Selah Dawson, and Ian Badjie; and three great grandsons, Ayden, Luke and Darien. He is preceded in death by his parents, beloved wife and one brother James Anderson. Dick’s family will receive friends at the Davis Family Funeral Home – Walker Brown Chapel, 918-333-7665, 4201 Nowata Rd, Bartlesville, on Sunday, from 3-5 p.m. Visitation will also be held on Sunday from 12-5 p.m. and Monday 9-11a.m. Funeral services will be held 2 p.m. Monday at Happy Hill Church, 399758 W 3100 Rd Ramona, OK, with Bro. Tom Dawson officiating. Interment will follow in the Memorial Park Cemetery in Bartlesville. Services are under the direction of Carter Davis and the Davis Family Funeral Home – Walker Brown Chapel. Online condolences and remembrances may be shared at www.DavisFamilyFuneralHome.com.

Richard &#8220;Dick&#8221; Wayne Anderson, 78, of Bartlesville, died Wednesday in Bartlesville. Dick, as he was known, was born the son of Roland Benjamin and Lucille Winifred (Schafer) Anderson on September 18, 1941, in Trimont, Minnesota.... View Obituary & Service Information

The family of Richard W Anderson created this Life Tributes page to make it easy to share your memories.

Send flowers to the Anderson family.