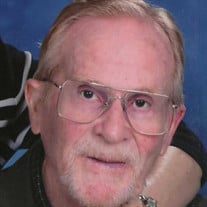 Loving father, grandfather and great grandfather Richard Noel Cooper, 90, of Bartlesville, died Wednesday in Bartlesville. Richard was born the son of Richard (Sr.) and Eva (McKiernan) Cooper on June 15, 1930, in Coffeyville, KS. As a child his family relocated to Wichita, KS, where he attended and graduated from Cathedral High School. While attending Sacred Heart College where he received a bachelor’s in chemistry, Richard reconnected with former high school friend Irene Kinderknecht. They quickly fell in love and married on Aug. 29, 1953. Soon after, Richard was inducted into the U.S. Army and Irene joined him at Englewood, MD. Once honorably discharged, Richard began his career with Phillips Petroleum as an engineering consultant, after obtaining a master’s in Chemical Engineering. The family was posted to Spain, Borger, Houston, and finally back to Bartlesville. As an adult, Richard spent a lot of time helping others and volunteering within the community. He volunteered at Dewey Public Schools, Salvation Army, Concern, Mary Martha Outreach, Guardian ad Litem, as well as St John Catholic School. He was a father figure and mentor to many children in the community. Richard loved the Lord and was a faithful member of St. James Catholic Church. Out of everything in his life, Richard loved his family the most. He and Irene were always together as a dynamic duo. They made sure to attend their grandchildren’s many school functions and sporting events to encourage their life pursuits. They also enjoyed travelling, Irene’s cooking and 66+1 years of loving marriage before Irene passed away this May. Richard is survived by two daughters Connie Templeton and husband Todd, Diane Trcka and husband Rob; four grandchildren Amy Everly and fiancé Jeremy Tafolla, Michael Trcka, Allison Trcka, Jamie Templeton; one great-grandson Cooper Lee Templeton; and two sisters Mary Natalie Hutchens and Carolyne Ann Foos; and many nieces and nephews. He is preceded in death by his wife as well as his parents and two brothers Joseph and John Cooper. Visitation will be Sun. noon to 5 p.m. at Davis Family Funeral Home & Crematory – Walker Brown Chapel, 918-333-7665, 4201 Nowata Rd, Bartlesville. A rosary will be said Sun. at 5 p.m. in the Walker Brown Chapel. Funeral mass will be held Mon. 11 a.m. at St. James Catholic Church. Interment will follow in the Memorial Park Cemetery. Services are under the direction of Carter Davis and the Davis Family Funeral Home. Online condolences and remembrances may be shared at www.DavisFamilyFuneralHome.com. The Family of the late Richard Noel Cooper have expressed their wish to establish a memorial fund honoring the life of Richard Noel Cooper and benefiting The Salvation Army

The family of Richard Noel Cooper Jr. created this Life Tributes page to make it easy to share your memories.

Send flowers to the Cooper family.