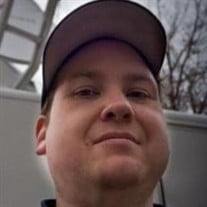 Richard J. Spears, 45, of Broken Arrow, died Wednesday in Tulsa. Richard was born the son of Jon and Judy Ann (Benefiel) Spears on December 20, 1974, in Tulsa. He was raised in Broken Arrow and attended Union Schools. An opportunity to attend the broadcasting certificate program at Rogers State University (RSU) led him to a lifelong career in television production. First with RSU Public TV before landing a job at KOTV Channel 6 in Tulsa. Richard became friends with Roy D. Mercer, a well-known Tulsa radio personality, and was offered a second job as a disc jockey or DJ which he enjoyed. As a storm chaser under the direction of Jim Giles, Richard covered the infamous 1999 Stroud tornado that destroyed the factory outlet mall. In fact, he was in Stroud just minutes before that tornado hit. After 15 years with Channel 6 Richard took to the road as a satellite truck operator, traveling wherever the news broke and covering major NASCAR races. During this time Richard became friends with many of the race teams and drivers he covered. After a health setback, Richard decided to work locally again when his meteorologist friend James Aydelott encouraged him to join Fox 23 in Tulsa. For the past five years Richard worked at Oral Roberts University Broadcast Ministry, a position he dearly loved. Richard’s passions in life outside of working, broadcasting and storm chasing were trains, model trains, and real trains. So much so, this railfan was currently building a garden railroad in his own backyard. On one special occasion during a family trip to the Royal Gorge railway in Colorado, Richard was able to join the engineer and actually take the controls for a short, thrilling while. It was a memorable experience any hardcore rail enthusiast would cherish. Richard loved the Lord and was eager to help out friends and many churches with their AV and tech needs. Oftentimes he just listened to their needs and got them headed in the right direction. He loved the many friends he made over the years and they loved him back – while his train has now departed this earth, his tracks remain and Richard will be dearly missed. Richard is survived by his loving parents Jon and Judy Ann (Benefiel) Spears, sister Stephanie Perla and Jourdan, niece Violet Isabella Perla, Aunt Cleo Stanberry, uncles Leo Benefiel, Charlie Marshall, Spears aunts, uncles, and cousins. Visitation will be held on Sunday from noon-5 p.m. at Davis Family Funeral Home – Walker Brown Chapel, 918-333-7665, 4201 Nowata Rd, Bartlesville, OK. Graveside services will be held at 2 pm Monday in the Memorial Park Cemetery. Services are under the direction of Carter Davis and the Davis Family Funeral Home & Crematory – Walker Brown Chapel. Online condolences and remembrances may be shared at www.DavisFamilyFuneralHome.com.

Richard J. Spears, 45, of Broken Arrow, died Wednesday in Tulsa. Richard was born the son of Jon and Judy Ann (Benefiel) Spears on December 20, 1974, in Tulsa. He was raised in Broken Arrow and attended Union Schools. An opportunity to attend... View Obituary & Service Information

The family of Richard J Spears created this Life Tributes page to make it easy to share your memories.

Send flowers to the Spears family.