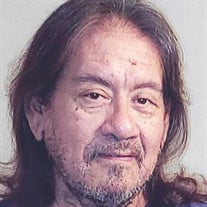 Rico Paul Razo, 64, longtime Bartlesville resident, died Tuesday, August 24, 2021, in Bartlesville. He had a head for business, a soft spot for fast cars and big families, and a spirit for helping others and leaving things better than he found it. Rico was born the son of Anastacio Garcia and Margaret Amelia (Campus) Razo on March 5, 1957, in Wichita, KS. He was raised in Wichita and during his youth developed a lifelong passion for cars, especially Mustangs and Corvettes. He was known to drag race downtown Wichita and cruise with friends. Pat, who would later become his wife, knew Rico from when he was young. The pair reconnected later when Rico would help watch after her four boys, keeping them in line. They quickly formed a family, were united in marriage on June 19, 1979, and blessed with 42 years together. Rico was a good provider and oftentimes had multiple jobs including working as an auto mechanic and training guard dogs. He spent invaluable time with the boys, running a lawncare business for 10 years, teaching them the value of honest work. In 1991, Rico, Pat and the boys moved to Bartlesville to be closer to family. Over time, many more of Rico’s family joined them here. 1992 was the year Rico and Corbie “Red” opened Santee’s Guns. In 2005 Rico formed Green Country Movers, a family business from which he retired just last year - after 16 years, many miles and many, many moves. Rico liked staying busy as much as he liked wide open spaces. So he could often be found outdoors maintaining his yard, working with his roses and elephant ear plants – with a love for the garden that he inherited from his mother. Rico was an avid gun enthusiast and enjoyed shooting, a passion he shared with his sons. He was adventurous and loved to try new foods, everything at least once. Rico loved the Lord and studied his bible. He liked to be silly – he just loved to laugh and make people laugh. Somehow, even with all his passions and pursuits, Rico was always generous with his time. He was the one everyone went to when they needed advice or help – or a laugh to lift their spirits. Most of all, Rico LOVED his family and loved being a dad and a grandpa. He enjoyed spending many precious moments simply having fun with his grandkids who were everything to him. When family was around, the more the merrier, Rico loved to love and was loved dearly. Rico is survived by his loving wife Pat; father AR (Deloris) Razo; step dad Jerry Barber; two sons, Bobby (Amber Dawn) Henderson and Corbie “Red” Henderson; daughter-in-law Lisa K Henderson; siblings Betty Ann Martin, Geno Razo and John Ray Razo, five grandchildren, Taylynn (Joseph Darnell) Scott, Trisha Scullawl, Faith Oliver, Trinity Suzzane Henderson, Dakota (Breanna) Scott and Shelly (Mike) Crocker; two great grandsons, Jensen Lee Darnell and Kane Crocker; great granddaughter, Octavia Crocker; two nieces, Lisa Marie Atkins and Deshane Emilia Williams; and three nephews, Wayland Levalley, Christopher Levalley and Michael Levalley; great niece Kiersten Sutton as well as a full fleet of extended family and friends. Rico’s family will receive friends at the Davis Family Funeral Home & Crematory – Walker Brown Chapel, 918-333-7665, 4201 Nowata Rd, Bartlesville, on Wednesday, from 6-8 p.m. Visitation will also be held on Wednesday from 10-8, and Thursday, 9-12. Funeral services will be held 2 p.m. on Thursday, at the New Ethel Reece Cemetery in Barnsdall. Services are under the direction of Carter Davis and the Davis Family Funeral Home & Crematory – Walker Brown Chapel. Online condolences and remembrances may be shared at www.DavisFamilyFuneralHome.com.

Rico Paul Razo, 64, longtime Bartlesville resident, died Tuesday, August 24, 2021, in Bartlesville. He had a head for business, a soft spot for fast cars and big families, and a spirit for helping others and leaving things better than he found... View Obituary & Service Information

The family of Rico Paul Razo created this Life Tributes page to make it easy to share your memories.

Send flowers to the Razo family.