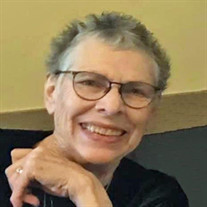 Rita Ann Cone, 76, of Dewey, died Thursday in Bartlesville surrounded by her loving children. Rita was born the daughter of Paul and Faith Alexander on March 19, 1945 on the family homestead in Sedan, Ks. Her family moved to Bartlesville where she attended local schools. As an adult, Rita never stopped seeking knowledge and took many college courses in a variety of subjects over the years, just for the enjoyment of learning. Rita worked from the time she was a teenager but eventually began a career at Phillips Petroleum Co. at one of the service stations. She then transfered to the research center and worked for many years as a chemist assistant. It was during this time that she met Grover Cone. At first, she wasn’t sure about Grover, but she eventually warmed up to him. They were united in marriage on June 30,1990. After Grover’s passing in 2002 Rita went to work for Siemens Applied Automation for many years before retiring. Rita had many passions in life which centered around her family and the outdoors. She enjoyed hunting, fishing, gardening, camping, cooking and learning new things. She loved her children and grandchildren dearly and being active in their lives was a priority for her. She loved the Lord and faithfully attended the Pentecostal Tabernacle Church. For the past two years Rita enjoyed attending activities at Hopestone Cancer Support Center. She was involved in the Women’s Cancer Support group, where she found friendship and support and through her humor and strength, she herself was an inspiration to others. Rita was dearly loved by her family and friends. Rita is survived by her children, Melody Donnell and husband Bobby, James Jump and wife Corinne, Paul Jump and wife Shanna and Angela Cade and husband Paul; two brothers, Philip Alexander and wife Debbie, Tony Alexander, and sister Paula Alexander; twelve grandchildren, Nicholas Anderson and wife Heather, Krystal McCarty and husband Todd, Lindsey Dittoe and husband Kevin, Savannah Donnell, Derrick Holden and wife Maddison, Brittney Holden, Lyndsey Holden, Curtis Jump, James Jump, Kendra Jump, Jacob Cade and wife Jackie and Caleb Cade; and thirteen great-grandchildren, Kelly, Abby, Kennedy, Mason, Madelyn, Emily, Grae, Daylon, Sophia, Violet, Lillian, Zane and Jameson. Rita also leaves behind a host of other beloved family and cherished friends. She is preceded in death by her parents, siblings Eugene Whitchurch and Jody Groomes, and the love of her life, Grover Cone. The family requests that In lieu of flowers that memorials be made to the The Journey Home, 900 NE Washington Blvd., Bartlesville, OK 74006 or to Hopestone Cancer Support Center, 206 SE Frank Phillips Blvd #3520, Bartlesville, OK 74003. Funeral services will be held 2 p.m. on Saturday, at the Word of Truth Fellowship Church in Bartlesville. Services are under the direction of Carter Davis and the Davis Family Funeral Home – Dewey Chapel. Online condolences and remembrances may be shared at www.DavisFamilyFuneralHome.com.

Rita Ann Cone, 76, of Dewey, died Thursday in Bartlesville surrounded by her loving children. Rita was born the daughter of Paul and Faith Alexander on March 19, 1945 on the family homestead in Sedan, Ks. Her family moved to Bartlesville where... View Obituary & Service Information

The family of Rita Ann Cone created this Life Tributes page to make it easy to share your memories.

Send flowers to the Cone family.