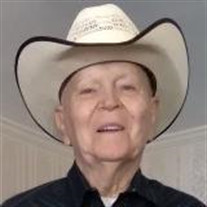 Robert Glen Lanier, 81 of Bartlesville passed away Sunday, November 14, 2021. He was born September 6, 1940, in Brownfield, TX to John and Mary (Snelson) Lanier. Bob met and married Sharon Rousseau and this union brought forth four children: Robert Garner, Steven Lanier, Christopher Lanier, and Mary Partyka. Bob was a hard worker. He was raised around the oil fields and soon became involved as a welder’s helper and worked in the fields. After a few years as a helper, he began welding on his own. Eventually, learning to weld pipe and earned a living as a fulltime welder. After some years Bob changed careers to OTR (over the road) trucking and spent over 40 years driving trucks nationwide. Bob met Naomi A. (Clemens) Hill, Founder of “Lighthouse Outreach”, and they were married in Bartlesville, November 21, 2009. Naomi founded “Circle of Love Ministry” where she and Bob ministered to their congregation helping the unfortunate in Bartlesville. Together they’ve been reaching out and touching lives in the Bartlesville community for over 25 years. Survivors include Naomi of the home; six children: Russell Halcom and wife Christina of Bartlesville, Dennis Halcom and wife Bonnie of Bartlesville, Mary Partyka and husband Matt of PA, Christopher Lanier of Kansas City, KS, Steven Lanier and wife Jan of Augusta, KS, and Robert Garner and wife Debbie of Wichita, KS; 10 grandchildren, 15 great-grandchildren, numerous nieces, nephews, and a host of friends. Bob was preceded in death by his first wife Sharon Lanier Rousseau, sister Lena McPherson, daughter Denise Scarberry, and son Robert Halcom. In lieu of flowers, donations in Robert “Bob” Lanier’s name can be made to: “The Journey Home”, 900 NE Washington Blvd., Bartlesville, OK 74006. Bob’s family will receive friends from 5-7 p.m. on Thursday and visitation will be held from 10-8 p.m. also on Thursday, and 9-12 p.m. Friday at Davis Family Funeral Home & Crematory, Walker Brown Chapel, Bartlesville, OK. Funeral Services will be held 2 p.m., Friday, November 19th, at Davis Family Funeral Home & Crematory, Walker Brown Chapel. Bob will be laid to rest on November 24th in the Elmwood Cemetery, Augusta, KS. Services are under the direction of Carter Davis and Davis Family Funeral Home & Crematory, Walker Brown Chapel. Online condolences and remembrances may be made at www.DavisFamilyFuneralHome.com

The family of Robert "Bob" Lanier created this Life Tributes page to make it easy to share your memories.

Send flowers to the Lanier family.